Ice age birth of a river

We have been thinking about the Roeliff Jansen Kill lately. It’s no Mississippi but it is one of the largest rivers in Columbia County and, when we got the maps out and looked it over, we found it has a lot of history to tell. So much that we think we will spend several weeks describing it, starting today. Let’s take a slow journey down the river.

The first thing the people normally describe about a river is its source. The Roe-Jan has an inauspicious head in southernmost Hillsdale. It flows south from there and eventually becomes a real stream. But we found a better, and more realistic, beginning for the river when we looked at the map of its first major tributary. That’s Bash Bish Brook and we think it represents the real source of the Roe-Jan. Let’s go there and take a look.

Bash Bish Brook originates in western Massachusetts and flows west. As it crosses the state border it flows through a very fine gorge; that’s where the Taconic State Park is. The gorge is no accident; it is, we judge, a product of the Ice Age. It’s when our story begins. We would like to take you to the park as it was at the very end of the Ice Age, roughly about 14,000 years age. 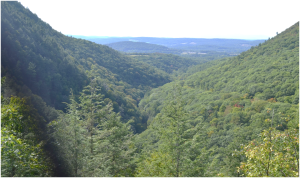 If you go there, we would like you to picture the gorge as it was back then. Up in the hills behind the gorge in Massachusetts there was still a lot of glacial ice, and it was melting, and melting very quickly. Vast quantities of water were pounding down the gorge. Bash Bish Falls is a pretty noisy place today, especially after a heavy rain. But back then, it was something else. Look up at the full expanse of the gorge and, in your mind’s eye, fill it to the top with foaming white water. Make it loud, like a continuous explosion. Feel the pounding which would have almost made the ground shake. You have to go there and really let your imagination have free rein. Then, and only then, can you appreciate that which is right in front of you. Bash Bish Falls is a scenic location; we are lucky to have it. But it has an ice age heritage that you have to know a little to truly understand it.

Let’s keep going.  Drive west to the village of Copake and then take Route 7a south a short distance, cross Bash Bish Brook and look to your left and right. You will see a nondescript plain. If you look carefully, you will notice that there is just the least bit of a slope, dipping to the southwest. We geologists will notice such a landscape and it speaks to us. It is, we think, best described as glacial outwash; it’s mostly sand and gravel that was washed out of the hills above during that end of the Ice Age rush of water. 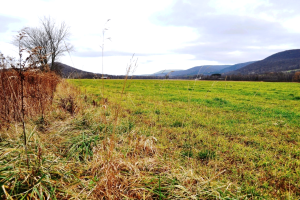 We would like to look at this landscape again and see it as it was back 14,000 years ago. There is a rush of water coming out of the Bash Bish Gorge above. The brown water is laden with sediment, much of it sand. The currents have broken up into dozens of small streams criss-crossing each other. We call these braided streams. Braided streams are typical of situations where there is an overabundance of sediment, far more than the stream can carry. That sediment is deposited upon a barren looking, glistening wet, gently sloping plane, which is inclined in a downstream direction. There are few if any plants to be seen; they have not yet had time to grow. This is Bash Bish Brook as it was back then. From time to time there were even greater rushes of water out of the hills above. For brief periods of time sizable sheets of water spread downstream across the whole surface. 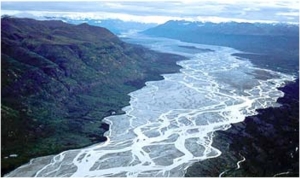 That’s not the case anymore. Long ago, the glaciers melted and the braided stream that was Bash Bish Brook subsided to become the lesser flow of today. We are back in our own time. We will continue our journey, from here, next time. And we will see a very different sort of Roeliff Jansen Kill, and a landscape with a very different history.