The New Kaaterskill Falls trail: Part Five: Beyond the falls

We continue our adventures on the newly renovated trail system at Kaaterskill Falls. In our last installment we had climbed up the Canyon below the falls. Then we climbed the new stairs and reached the top of the falls. Now we are ready to continue on toward Kaaterskill Clove itself. It used to be that the trail up the canyon was officially a dead end. It ended at the bottom of the falls, and hikers were discouraged from going any farther. They were the cause of too much erosion, foot erosion. Now, however, as we have seen, you can climb the stairs and hike on to the top of the falls.

From there we can now easily continue on to the rest of the trail system. From the top of the falls we turn around and head back upstream. We walk up the path on the left (west) side of the stream. It does not take long to reach a place where you follow the trail across the stream. When we were there last, we had to make an easy crossing, hopping across large boulders. Since then, a small bridge has been constructed here. Cross it, ascend the trail and head east until you reach a junction with the fabled Blue Trail, otherwise known as the Escarpment Trail.

The Blur Trail may just be one of the most picturesque hiking trails anywhere. It begins just west of Windham High Peak and continues south, many miles to Kaaterskill Falls. The Escarpment Trail then links with parts of the Long Path and then the Overlook Mountain Trail. Altogether, this is a wonderful hiking experience. The recent renovations have, of course, only made it better.

Our goals, when we were there, were less ambitious; we just wanted to reach the north rim of Kaaterskill Clove. We continued south on the Blue Trail, and found our way, skirting the southwest flank of South Mountain. Soon we reached the Layman Monument. It’s a commemoration of the sacrifice made by Frank Layman here in the August of 1900. Layman died fighting a forest fire. His monument commands a view of Haines Falls in the distance (see our first photo). 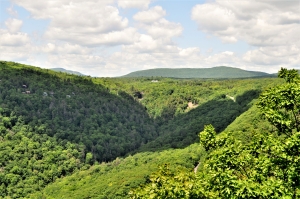 We continued down the Blue Trail, heading to the east. The trail is blessed with a number of very good views into the clove. People have been coming this way for two centuries. Almost all of them came here for the scenery. You find a good location, pause, and gaze downward. There are massive ledges of sandstone all along the rim, each forming a cliff. The blue trail hugs those cliffs, assuring a picturesque experience. Below, the clove narrows to a knife edge at the bottom, about a thousand feet down.

You look up and gaze across the Clove. On the other side is an equally steep slope. It is cut by several picturesque streams. They include Santa Cruz and Wildcat Ravines. These two streams don’t just flow downstream, they plummet. Each follows an almost perfectly straight line from their tops to their bottoms. They are recognized as belonging to a special category of streams, called parallel streams. After an especially rainy spell they are powerful, raging, foaming, pounding, thundering torrents. They are called “parallel” because they all flow straight downhill, parallel to each other. The steep slopes generate those straight pathways. It’s important to understand what such streams are, and to be able to recognize them; you need to know these things in order to truly comprehend and truly appreciate landscapes such as these.

We continued on until we reached a scenic view which has just the right name. It is “Sunset Rock.” It is a great ledge of sandstone that towers above the Clove. (See our second photo). It’s not just a pretty face; there is a lot of good story telling that can be done right here. Look at our photo and take note of the flat surface. When you are actually there, you will also notice glacial striations that were carved here by a passing glacier. That glacier’s ice once filled all of the valley below and overran the ledge. That’s when this flat surface was carved. 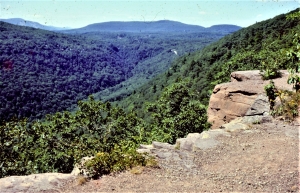 Now, look east from Sunset Rock and envision a great glacier coming out of the Hudson Valley. It advances toward us and, as it does to, we look down and see it rising within the Clove. It swells up and passes over Sunset Rock and scours that flat surface. It will continue westward and enter the canyon below Kaaterskill Falls. Then it will rise up that canyon, cross over the falls, and flow onward as far as South Lake. This is the flow of ice that created the scenery here. Stand atop Sunset Rock and slowly turn a full 360 degrees. Drink in the beauty here. Nothing here is accidental; it is all the product (we think the gift) of the Ice Age.

Contact the authors at randjtitus@prodigy.net. Visit their facebook page “The Catskill Geologist” and their blog site “thecatskillgeologist.com”