The New Kaaterskill Falls trail:  Part four: The top of the falls

Kaaterskill Falls has always been renowned for its scenic beauty. It first became widely known after the nearby Catskill Mountain House Hotel opened in 1824. From the hotel the young landscape artist, Thomas Cole, went exploring and visited the falls. He painted two of his most well-loved views here, one from the top of the falls and another from the bottom. You will have no trouble finding these images online. The falls have, subsequently, been painted by generations of artists who followed in Cole’s footsteps.

Generations of recreational hikers have also visited the falls and now the new staircase makes such visits much easier and far more practical. We have always admired the scenery at Kaaterskill Falls, but we are different from most others; when we visit the falls or look at those paintings, we see glaciers! We stand at the top of the falls and look down to see a glacier filling the valley below us; as we watch, it slowly rises up the canyon and then we have to step out of the way as it swells up over the falls themselves.  We lift ourselves up into the air and turn around to watch as the flow of the ice continues on to South Lake. Geologists can do that sort of thing.

How can we claim such otherworldly visions, especially as scientists? It is an extraordinary claim and Carl Sagan said it best when he said, “Extraordinary claims require extraordinary evidence.” Can we back up our “visions” with evidence? Yes, we can. It all began down at Bastion Falls where we began our trek several columns ago. We had climbed down from Rte. 23A and were about to ascend the canyon. But we looked around and noticed a number of boulders with remarkable features on their surfaces. Take a look at our first photo; see one of these boulders. Notice that the surface of this rock is covered with large deep scratches. These are called glacial striations. This rock had been swept along with the flow of ice and dragged along for who knows how far. Along the way it was dragged up against many other similar rocks, and each impact left a scar in the form of a striation.

After seeing the first of these down at Bastion Falls, our eyes were trained to notice more – many more. These comprised the “extraordinary” evidence of the glacier that had, long ago, flowed down the Hudson Valley, risen up Kaaterskill Clove and then turned into the falls canyon. We kept finding more of those striated boulders as we climbed up all the way to the bottom of the falls. We realized that we had been following in the path of the glacier that had been here about 14,000 years ago. But, the question remained: had that glacier ascended up and actually crossed over the top of the Kaaterskill Falls themselves. Those falls are 260 feet tall; could a glacier have actually “climbed” over them? We needed more extraordinary evidence. We climbed the new stairs and hiked on to the top of the falls hoping to find that evidence.

At the top of the new staircase a hiker is led to a dirt trail. That trail, in turn, leads to an intersection with the Blue Trail. A right turn there takes you on to the northern rim of Kaaterskill Clove; a left turn takes you to the top of the falls. We went left. Soon we were standing on the great ledge that makes up the top of the falls. We gazed down the canyon below and could not help but envision it filling with the ice of a glacier that slowly rose right up to where we were standing. But had that glacier actually passed this spot; had it risen and continued on to the north? We looked about and there was the evidence, something we had never noticed before at this spot.

It had been very dry in recent weeks and the flow of water was very low. Most of the bedrock at the bottom of the stream was now exposed and on its surface we found the evidence we had been looking for. The sandstone came from a Devonian stream channel and it contained several small quartz cobbles.  These had been carried by that long-ago flow of water. All these cobbles had originally been rounded by the Devonian streamflow. But now, each one had had its upper half planed off. Its flat upper surface had been scraped flat so that it lay at exactly the same level as the surrounding sandstone (see our second photo). 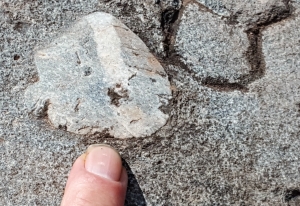 These were ice age features that we have frequently seen elsewhere at North Lake. When a glacier moves across a sandstone landscape it is likely to intersect cobbles within the country rock. It will plane right through them. These are fairly common on the Blue Trail at South Mountain and near Sunset Rock, but this was the first time we had seen them at the top of Kaaterskill Falls. They are features unique to the flow of glacial ice; we had our undisputable (and extraordinary) evidence. Our glacier had risen up over the falls and scoured off the tops of those pebbles as it continued upstream. But there was more.

At the top of Kaaterskill Falls lies a gigantic boulder (our third photo). Curiously, it does not have a name, but we immediately recognized it as being what is called a glacial erratic. Erratics are boulders that were swept up in the flow of ice and transported from where they came from and left where they are found today when the ice melted. This erratic had likely fallen off of South Mountain and onto and into our advancing glacier. It then flowed with the moving ice just to a site which would eventually be the top of the falls. Then the climate warmed, the ice melted and the erratic was lowered down to where it is seen today. It’s additional convincing evidence of the local glacier. 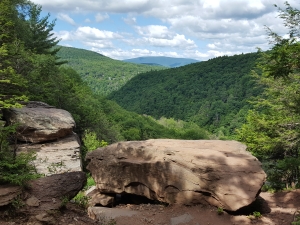 Climbing up to the top of this boulder is not easy but it is worth the effort. We did so and found the name Sanford Robinson Gifford inscribed on its top. Gifford was one of the most esteemed members of the Hudson River School of Art. He had painted here and commemorated his visit with the inscription. We wondered if he knew the ice age origins of this boulder.

One final treat for us was to walk down the dirt path that leads to the lands west of the falls. It only took us three minutes to get to the new deck with its knockout view of all of Kaaterskill Falls. We described that in the next  issue.

Contact the authors at randjtitus@prodigy.net. Visit their facebook page “The Catskill Geologist” and their blog site thecatskillgeologist.com.