On The Rocks; The Woodstock Times

It’s a funny thing about our geological wanderings. Sometimes, when we are on our way back down a trail, we see things that we missed on the way up. That was the case with our adventures at Kaaterskill Falls. We thought we were pretty much done with the day and were hiking back when we just took notice of things that we had not seen earlier.

Take a look at our first photo. It shows a rock type called a conglomerate. That’s a rock composed mostly of pebbles. It is allowed to have at least some cobbles too, especially if they are small ones. That’s what you should be able to recognize in our photo. We found a fair scattering of boulders composed of this rock type in the Kaaterskill Falls canyon. We looked but did not find any bedrock horizons composed of this stuff. 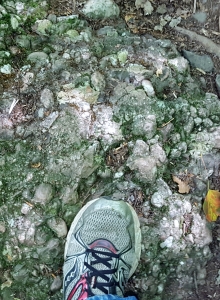 These conglomerates were stream deposits, but not just any streams; these were special ones. It takes a lot of energy for a stream to be able to move a pebble, let alone a cobble. We measure the energy of a stream in terms of current speed. Faster flowing rivers have more energy than the slow ones. These had likely been very fast flowing streams. But that may not make much sense if you have been reading our recent columns. We have been describing ancient streams that were flowing across the broad flat floodplains of a major river delta. There is almost no downhill on a delta so the water should not have picked up much speed. How could such stream deposits have formed?

Modern river deltas almost always display sluggish rivers flowing gently across flat surfaces. Look into any of these types of streams and you find fine grained sand, not pebbles, and certainly not cobbles. So, where did these rocks come from? These were mountain streams; they flowed down the steep slopes of a mountain front. But where were those mountains?

When we got a chance, we looked east and, on that horizon, we envisioned the profile of a tall mountain range. Those were the Acadian Mountains. We have written about them from time to time. Those were lofty mountains that rose up, probably tens of thousands of feet, where the Berkshires are today. We looked east, and into the past; we saw the steep west-facing Acadian slopes. Pounding, raging, foaming, thundering mountains streams cascaded down those hills.

Those were the streams with enough energy (velocity) to sweep up and carry off pebbles and cobbles. You have, no doubt, seen mountain streams. They are sometimes also called whitewater streams and for good reason. We want you, from now on, to be watching for the conglomerates that we are describing. They are in those mountain streams. When you see one, we want you to form an image in your mind’s eye of what they represent.

But we still have a problem here. Whitewater streams are supposed to be on steep mountain slopes so again we ask – what are such rocks doing in the deposits of the Catskill Delta? We pondered that for a while and then hypothesized that these streams must have had so much momentum that, by the time they got to the flat delta surface, they simply continued onward, out across it.

We were happy to have noticed those conglomerates and then we continued on down the trail, almost getting back to the Rte. 23A. But there was still one more stratigraphic feature. Take a look at our second photo. Here we see a cross section from one of those typical Catskill Delta streams, one of those that had slowly meandered across the delta. 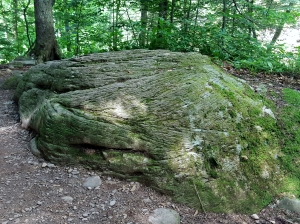 Those streams do become far more energetic during flood events, and we saw the evidence. Our photo shows strata dipping to the left and to the right. This is called trough cross bedding. These are flood deposits. During one moment of flooding the currents deposited sediment one way and a little later, sediments were deposited the other way. This is not terribly unusual or uncommon, but this was a very nice example. It was visually striking and made for a good photo, so here it is.

We continued on down to Rte. 23A and made our way back to the car; our day was over. We had explored the new Kaaterskill Falls trail and found it well worth the effort. We are grateful to the Department of Environmental Conservation for what they have done here. They have dramatically improved what had already been a fine scenic trail.

We want you to share this experience and urge you to follow in our footsteps, but we would be remiss if we did not leave out a warning. Soon after our visit a 17-year-old boy fell to his death here. It is a very dangerous place. Go and enjoy it but be very careful.

Contact the authors at randjtitus@prodigy.net. Visit there facebook page “The Catskill Geologist” or their blog site “thecatskillgeologist.com.”