The New Kaaterskill Falls trail – Part Three: The Side Trail

Perhaps the best thing about the new renovations at Kaaterskill Falls is the new side path. People have always wanted to walk in from the right side of the falls and explore the great ledge that caps the lower falls. To do that in the past, you always had to follow a small natural ledge. It was narrow and, with a dirt path, it could sometimes be slick and dangerous. People had slipped and fallen to their deaths there. That natural ledge had to be widened; it was. 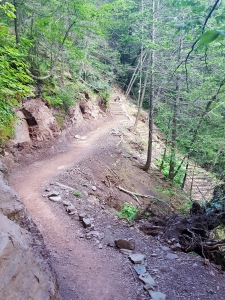 Now there is a broader, flatter and far more stable path (our first photo). You simply make a left turn and walk out onto that part of the new trail. Soon you are atop the ledge of rock that makes up the lower falls. It’s one of the most popular destinations for hikers at Kaaterskill Falls. From the top of that ledge, you get a fine view of the canyon below the lower falls (you should always be very careful not to get too close to the edge – there was a death here this last summer). Alternatively you can turn around and look up into the great amphitheater at the fall’s center (our second photo). That “amphitheater” is a grand rounded cavity, roofed over by a massive ledge of thickly stratified sandstone.

Let’s take in that second view, looking up into the amphitheater; it is so much more revealing, geologically. Our second photo was taken from the top of the ledge. The view looks into that cavity, and the upper half of the photo shows its “roof.” That roof consists of sandstone strata 20 or more feet thick. Those strata dip first right and then left. These are typical stream channel deposits. We are looking at a cross sectional view of an ancient river, and a very large one at that. The strata below the river deposits are finer grained red shales. These were deposited on the floodplain surface that lay adjacent to the old river. These are often called overbank deposits. Take another look; those sandstones are river deposits, the red shales in between are floodplain sediments. Now you know about 90% of what there is to know about the stratigraphy of the Catskill Delta!

The two units of rock are very different in how well they hold up in the face of weathering and erosion. Those sandstones are very sturdy materials. They have resisted the effects of weathering and time has left them as a roof-like ledge, overhanging the softer strata below. Those softer shale strata were far more easily weathered, and nature sculpted them into that amphitheater. All this has always contributed to the scenic beauty of the falls. Thomas Cole painted a view from the inside, looking out. His painting was turned into a print which is commonly available online or in antique shops. Winslow Homer climbed to the back of the amphitheater and did a painting of some “Gibson Girls” climbing its slopes. It too is commonly available as an antique print. Both images are easily found online. Now, with the new trail, it is easier to go see them “in person.”

On our way back down the side trail we found another surprise. As we approached new main staircase we found that the side of the trail exposes one more ledge of rock. This one reveals the presence of a fossil soil. That’s the dark horizon just above the trail on our third photo. That, properly, is called a paleosol. It was not an especially well developed soil but we found some typical soil structures. These were vertical cracks. This sort of thing is called desiccation fracturing. These cracks took us back in time to a Devonian age dry season. Many geologists believe that the Devonian climate here was seasonal. There were dry seasons and wet seasons; the desiccation cracks were formed within the soils during one of those very ancient dry seasons.

Our paleosol was at the very top of the dark part of that side trail ledge. Whenever we see such a thing we can’t help but to reach out and put our fingers on the top of that soil. We understood that we were literally touching the surface of the ground that had existed here 380 million years ago. Once, a person could have walked around on that surface.

We returned to the main staircase and climbed uphill. At the end of the staircase we found a dirt path and there was another curiosity. We looked down and saw that this modern soil was also cracked in a manner to what had happened here during the Devonian (our fourth photo). What a strange thing it should be for the modern-day world to so closely mirror something that is found in ancient rocks!

At the top of the trail, we turned left and headed for the top of Kaaterskill Falls.

Contact the authors at randjtitus@prodigy.net. Visit their facebook page “The Catskill Geologist” or their blog site “thecatskillgeologist.com”