We continue our exploration of the recently renovated trail system at Kaaterskill Falls. The most important of the recent changes here was the installation of a new set of stairs up the right side of the falls (our first photo). You climb up the yellow trail and, just short of the bottom of the falls, you branch off to the right and make your ascent. We are told that there are about 190 of them. They are bluestone steps, cut from modern Catskills quarries. We expect that they will be enormously durable; they should last “forever.” About halfway up there is a side trail which leads to the ledge that makes up the top of the lower falls. 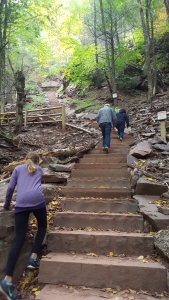 But the new staircase continues up and to the right. After a while it levels off a bit and there you will find that the staircase ends, and a dirt path follows. After some more climbing up that more gentle slope you reach an intersection with the Blue Trail, one of the main trails in all of the Catskill Front. Take a right and you can follow the Blue Trail to North/South Lake Campground and, from there, all the way to Windham High Peak. But we were looking to the left.

In many ways, the staircase is a return to the distant past. During much of the 19th century there was another staircase hereabouts. It was composed of wooden steps and followed much the same path, leading up the right side of the falls. We are very fond of a print done back then, showing a very out-of-shape man climbing down to the bottom of those steps (our second picture). He is sweating profusely, and he is clearly out of breath. We are guessing that this old staircase was built and maintained by the Laurel House Hotel which was perched just above the top of the falls. We do not know when that staircase disappeared. 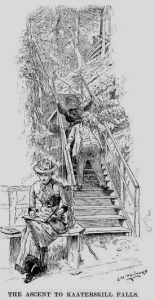 The new staircase solved an old problem. In the recent past, once you got to the bottom of the falls, it was only natural that you would want to continue on, climbing to its very top. That was never easy. If you look to the left of the falls, then you will find a rocky cliff. There is no way, unless you are a very accomplished mountain climber, you would want to go that way. In the past, if you looked to the right, there was a slope that, although steep, could be climbed by a recreational hiker. At its top you could continue on to the left and reach the top of the falls.

But, of course, there was another problem. After decades of climbing this slope, it had just plain gotten worn out (see our third picture). Human foot traffic is recognized by geologists as a major category of erosion. Tens of thousands of people had made the ascent year after year. The trail on that slope had gotten just plain beaten up and ugly. It just was not what was wanted in a forest preserve. It only got worse when the weather had been rainy. That slope became a quagmire of mud. And the long-term prognosis was very poor. Kaaterskill Falls has always been a draw; it had always been a lure for countless hordes of hikers, and it was only getting worse.

The irony was that people came to see an especially beautiful natural site and their very presence was destroying it. Our column first took note of all this in 1998. We argued that a staircase was needed to save the falls. There had been that wooden one there during the hotel era of the 19th century, but that was long gone. Sadly, things are never simple. Staircases are expensive but, beyond that, there was the notion that this wilderness site simply should not have a staircase; such things are not “natural.” It involves and age-old debate between the philosophies of conservation and preservation. We always felt that the preservationists had gone too far, but what could we do?

They tried to solve the problem years ago. It was decided that the trail, just right of the falls, should be officially closed. When you got that far, you found a sign that said the trail was closed. A fat lot of good that did; people just kept climbing that slope and its condition continued to worsen. This was a major problem and it had to be addressed. The new staircase solves it. We think they have done a very good job installing it. They tidied up the slope, left and right, removing the scars of recent foot traffic. And, the staircase blends in very nicely with the surroundings. In fact, several of the photos we took were of no value because the stairs were too hard to see!

Contact the authors at randjtitus@prodigy.net. Visit their facebook page “The Catskill Geologist” and their blog site thecatskillgeologist.com. Everybody else has.