We begin today a series of columns about the newly renovated trail leading up to Kaaterskill Falls. We want you to go and see what has been done there; it’s a wonder. We started, of course, at the bottom; geologists always do it that way; that’s where the oldest rocks are. You start at the bottom and work your way upward, traveling through time into younger and younger strata. Hereabouts the bottom is just below the bridge at Bastion Falls.

Bastion Falls tumbles over a thick ledge of rock just right and uphill of the highway, Rte. 23A. It is a massive ledge of tan colored sandstone. Whenever we see a thick sandstone of this sort we envision a river – a big river. These sandstones had, long ago, been sands, and those sands had been deposited in the channel of that river. What a thought this is; we were looking at a modern creek and its waters were tumbling over a ledge of rock created by a much larger river, one that had occupied this very space – about 380 million years ago. The two rivers cross each other in space, but not in time. Roads can intersect each other but rivers cannot – except in time. 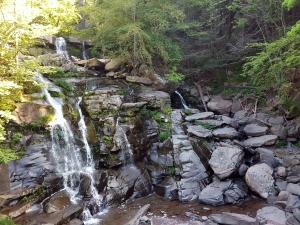 But we were only looking at a fragment of something much bigger. Our Bastion Falls River had been only one among many, many others. We turned around and looked up to the top of the clove, rising hundreds of feet above us. Much of what we saw was composed of many other petrified river channels. In between the channel sandstones were the silts and clays of ancient floodplain deposits. Again, we looked up and recalled what we have long known, all this that we call the Catskills is a great petrified delta. It once was a delta that would easily have rivaled the Mississippi River Delta of today’s Louisiana. It has a name: the Catskill Delta. We turned around and continued our climb up a scenic modern canyon but, at the same time, we were acutely aware that we were passing across the top of an ancient delta.

A lot of people confuse Bastion Falls with Kaaterskill Falls, but Bastion is just the warmup for the main act. The falls, here, need more explicit signage. We knew better; we climbed down to the stream bottom below the falls. There we saw a number of very large boulders (the right side of our first photo). These were tan sandstones too; we surmise that they had, perhaps ages ago, weathered free from the main ledge and fell to where we saw them.

It would have been easy to ignore these boulders; they really seemed to be thoroughly routine rocks. But we were curious about them; we scrambled around and looked them over. It was worth the effort. Soon we found something special: several feet of a fossil tree trunk, lying of the surface of one of those boulders. It had been a fairly sizable tree with a four-inch diameter. Unfortunately, its roots and foliage were absent, long lost to the vicissitudes of time. 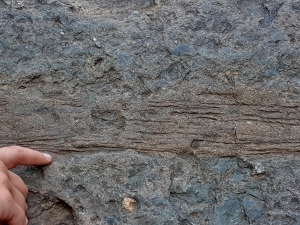 We had traveled back in time to visit the fabled Gilboa Forest. That was the forest of primitive trees that had, during the Devonian time period, those 380 million years ago, lived upon the floodplains of the Catskill Delta. We did not have a specimen well enough preserved to put a name on it, but we knew with certainty that they had been trees; we could see their bark. You don’t find fossil tree trunks in the Catskills all that commonly, so this was worth our efforts. But it soon got better; we poked around and in just few minutes we found sections of two more fossil tree trunks on two more of those boulders. Finding three trunks in just a few minutes is genuinely unusual. We needed now, as scientists, to conjure up a story to explain this remarkable happenstance.

It wasn’t hard for us to come up with a hypothesis. Our fossil trees had all been buried in the sands of a sizable river channel. Sizable rivers have, from time to time, sizable floods. It was easy for us to look into the past and envision three of those floods, each carrying one of those tree trunks. What a thought! All around us recreational hikers were climbing up the yellow trail. They were admiring the beauty of the canyon. We had been doing the same – until we had taken a detour through time.

Well, you see what we are doing here. Over the course of the upcoming weeks, we intend to continue with a series of articles which will take you up the Kaaterskill Falls canyon. We will see it as it is today, and we will marvel over how recent engineering has improved the experience here. But our main goal is to travel through time and see this vicinity as it was during the Devonian time period, and also about 14,000 years ago during the ending phases of the Ice Age. This canyon has always been a wonderful place for you to visit. We hope to give you the kinds of knowledge that will make it far better.

Contact the authors at randjtitus@prodigy.net. Visit their facebook page “The Catskill Geologist” and their blog site “thecatskillgeologist.com.”