The Glasco Pike #5: How long is time?

The one thing that geologists can truly claim is that we have a very well-developed understanding of the vastness of time. We deal in enormous amounts of time all the, well, time! Today we continue our own journey through the eons, one that has taken us along the Glasco Turnpike. We are looking at the history of Woodstock and all of Ulster County as it was during Devonian time, a little less than 400 million years ago.

Last time, we had reached a point one mile west of the Plattekill Bridge. There we saw a petrified river channel. We had entered into the realm of the Catskill Delta. That’s a great delta complex of the Devonian age; it is comparable to the Ganges Delta of today’s Bangladesh. Now we continue westward along the Glasco Turnpike on a journey which will carry us toward Overlook Mountain.

This trip of several miles will carry us uphill about 500 feet, but it will also carry us “uphill” through time. As you head this way as you pass the occasional outcrop of bedrock. For the most part these rock exposures are of sandstone. It’s the type of sandstone that we, around here, call “bluestone.” Each of these ledges is similar to the outcrop we saw in our last installment; they are all Devonian river channel deposits.

But there are so many of these deposits; it leads to a simple question: how can there have been so many rivers in the Woodstock area way back during the Devonian? And, as we learn more, the mystery gets even better. All of these ledges have a gentle incline to them; they dip to the west. That means that if we drive down the highway and pass one ledge and soon pass another, then we have, in fact, passed two successive ledges in a stratigraphic sequence. There is a sequence of inclined ledges arrayed down the highway. Each ledge represents an ancient river.

What this means is that, through time, many successive rivers flowed across the Catskill Delta. The delta, like today’s modern Mississippi Delta, was constantly sinking. As the old delta surface subsided, new rivers would flow across new surfaces, carrying with them new deposits of sand to make new bluestone. Try to appreciate this as you pass the many ledges along the Glasco Turnpike. You are passing through a stratigraphy, and you are passing through time, a lot of time.

That has been the point of our whole series of visits along the Glasco Turnpike. We have used this highway to make a journey, a Darwinian journey, through time. Let’s make a few stops or at least slow down a little.

Just 7/10’s of a mile west of the Rt. 212 intersection is an outcrop that displays a nice example of a river sandstone, which lies immediately above a fossil soil horizon. This is what happened there. There had been a delta plain surface which, over a period of time, developed a good thick soil. Then, probably very gradually, the delta plain subsided. A nearby river jumped its old channel, moved here and eroded its way into the soil that we see here. For a long period of time that river flowed this way and then, at a much later date, it jumped its banks and moved somewhere else. While at this location all the sands of the ledge you see accumulated.

Keep going west and just 1/10th of a mile west of Plochman Lane is another fine outcrop. The lower 2/3rds are made of strata of red silty sandstone. These might be considered as more fossil soils; they would remind you of Georgia red clays. That is pretty much what you would expect, considering that this was a tropical climate way back then. The rest of the outcrop is another river channel. 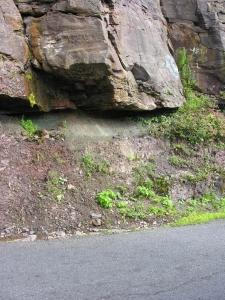 At Meads Mountain Road you can turn and drive uphill. If you wish, you can stop at the trailhead for Overlook Mountain. From there you can hike up to the top of the mountain. All the way, you will continue to pass more ledges of river channel bluestone. Commonly you will see more horizons of red fossil soils. You are traveling upwards through the sediments of the Catskill Delta, once one of the world’s great delta systems. You are watching as it gradually subsided and gradually accumulated more sediment. That took a lot of time.

And, once again, that is the whole point of our journey. We have traveled, these past five chapters, from Glenerie to the top of Overlook Mountain. We have watched as a shallow tropical sea came to deepen into an abyss. Then we watched the waters shallow again and soon a huge delta complex overwhelmed the whole Catskill region. From the top of Overlook Mountain, we can gaze back towards Glenerie and now have a real understanding of what the rocks between here and there represent. We have an inkling of the enormous amount of history that has unfolded before us. Now we also have an inkling of how long is time.