The Comeau is one of Woodstock’s most valuable and beloved properties. Its land use has, of course, been the subject of great controversy, and of many Woodstock Times articles, but no one has ever disputed that it should be there for the benefit of the residents. We have long believed that an appreciation of the geological history of a location adds greatly to its enjoyment, and we would like to continue on that theme today.

In an earlier article we described how this stretch of the Saw Kill Valley was once at the bottom of an ice age lake. Now we would like to focus on second ice age chapter in this area’s history. Most of the Comeau lies atop a sizable and broadly rolling hill. The soccer field is located precisely at the top of this hill. We had, for quite some time, struggled to understand the origins of this hill. Geologists are condemned to do such things. 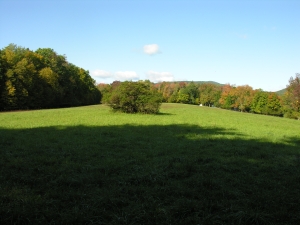 We really couldn’t fathom how this hill came to exist where it is. It is composed of Devonian bedrock at its eastern end, but the perfectly rounded shape to the west did not conform to what bedrock should look like. Sometimes this sort of problem makes your head hurt and that was the case until we hit upon a very possible solution to the problem.

If you read our last column then you learned about two hills lying southeast of Woodstock. These hills are known to geologists as drumlins. They were sculpted by the passing ice at the very end of the Ice Age. They are shaped like upside down spoon bowls. That makes them perfectly rounded at their tops.

We had not considered the possibility that the Comeau Hill had been a drumlin. But then, one day, we took another look at the satellite photo of the Saw Kill region, and it hit us. The Comeau hill was indeed a drumlin. It’s not a big drumlin but that is, we believe, what the hill amounts to.

The two (or maybe three) drumlins lying southeast of Woodstock are full-sized, well sculpted drumlins. They display everything that you want to see in a drumlin. They record what may have been the third advance of the ice into the Saw Kill Valley. And that, it seems to be, is exactly what formed the Comeau hill. That final advance of the ice split into two lobes. One passed to the southeast while the other advanced further up the Saw Kill. It probably ran out of steam just a little to the west. That lobe made the hill.

Most geologists argue that drumlins form when a glacier advances across an older pile of ice age sediment and reshapes it into that spoon shape. Other geologists, however, argue that there is a second mechanism for making a drumlin. They make the case that a drumlin forms when a glacier rides over a knob of bedrock. The ice of the glacier can easily pass over the obstruction, but not without being altered in the process.

You see, there is usually a lot of water within a glacier of this sort; they are just very wet. That water cannot climb up over an obstruction and pass on to the other side. So, when the ice does reach the other side, it is a lot drier than it had been. Apparently, this robs the glacier of much of its ability to transport sediment. That sediment is smeared out on the downstream side of the obstruction and sculpted into a drumlin.

That seems to be the case here. Take a look at our satellite image. The Comeau drumlin, unlike the others in the region, appears to be an obstruction drumlin. The glacier encountered that eastern bedrock, I spoke of earlier and created the drumlin. Late at night in geology bars, we debate this sort of thing and not everybody ends up in agreement. But the Comeau hill strikes me as a very good argument for the obstruction hypothesis.

But the debate may be lost on most residents of Woodstock. What you can appreciate is the ice age origin of this lovely hill. When you are up there watching a soccer game or just walking around, please notice the gently rolling shape of the hill. Gaze west and appreciate the sculpting that went on here. Over the decades there have been a lot of sculptors living in Woodstock, but Nature was the first and that was about 14,000 years ago.