The Glasco Pike #4: A Fossil River

We have been exploring time itself over the course of the past several columns. Physically, we have been moving westward along the Glasco Pike. But, in terms of time, we have gone back to the early Devonian time period and have been moving forward. Our goal is to look at our local geological history in the way that geologists see it. We are looking at several million years of time and history. This is history that took place during the Devonian time period. Young world creationists do not believe in the Devonian. They commonly attempt to fit their view of geological history into the catastrophe of the Noah’s Flood. Our job is not to criticize that but to explain the point of view of geologists. Let’s continue our journey.

We are going to drive about a mile west of our last stop where the Saw Kill crossed the Glasco Turnpike. We will climb a hill and then, to the right, is a fine ledge of rock. Parking is tricky here and we don’t want anyone to be hurt so use good judgment. You might just glimpse and run. It’s best to view the ledge from across the highway. When you do so then you can begin to see what these sandstones represent. They make up a fine cross section of an ancient river channel. Take a good look; you will see the channel is deepest in the middle and it shallows both left and right. 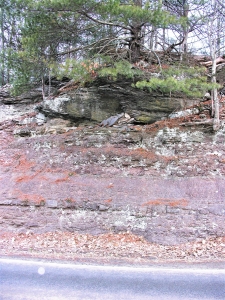 This is a petrified river. That is likely to be a novel idea for most of you. There are petrified trees and petrified dinosaurs, but a river? Who has ever heard of such a thing? Well, Catskill area geologists have, and they have heard of a lot of them. When we left off last time, we were watching the Woodstock area as it was rising out of the sea. Our view of the outcropping along the Saw Kill showed a shallowing sea. The strata at the top of that outcrop formed near the ancient shoreline. If that interpretation is correct then it cannot be much of a surprise that younger, overlying rocks should display evidence of having formed in a terrestrial landscape. What is more “terrestrial” than a river?

We have entered into the realm of the great Catskill Delta. It is a petrified delta and there we encounter another one of those surprising phenomena. Yep, there are petrified trees and maybe petrified rivers but a delta!? Look out the window and up into the Catskills. Try to imagine that the whole thing is a petrified delta. Kind of changes your perspective on things, doesn’t it?

The best way to come to understand the Catskill Delta is to get out a good map of Bangladesh. That Asian nation has been developed upon the Ganges River Delta. A good map will show a landscape dominated by scores of rivers, big and small, all emptying into the Bay of Bengal. Our little petrified river was very similar; it was one among scores of rivers crossing the Catskill Delta and emptying into a body of water called the Catskill Sea. Our river’s waters had descended down the slopes of the Acadian Mountains: a great range of mountains in what is today New England. Mountain streams had eroded into the Acadians and turned a great deal of mountain into sand. Our river had carried a lot of that sand as a channel deposit. See top of our first photo. 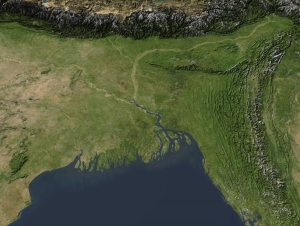 When you look at a river, it appears to be something that will last forever. Who can possibly imagine the Saw Kill or the Esopus Creek not being where they are? But rivers don’t last forever; someday even the Hudson will disappear. It’s easier to lose a river on a delta. There rivers have a habit of jumping from one site to another. During great floods, a river can be diverted of to a new direction, leaving its old channel abandoned. This is, no doubt, what happened to our little petrified river. Its flow of water jumped to a new site and went in a new direction and the old channel sands were left to slowly petrify. All memory of that river was lost until geologists came along and recognized what is there, along the Glasco Turnpike.

Charles Darwin is remembered mostly as a biologist, but he was a very good geologist as well. He would have understood the story of the Catskill Delta and this view of rocks would have fit very nicely into his mindset.

Young Earth creationists will likely have a problem here. If the Catskills are a great petrified delta, then that is something that must have taken an enormous amount of time to have been deposited. A mere 6,000 years is not going to be enough time, geologists think that it took many millions of years. And that is the point of this whole series of columns; We am laying out the evidence. We report and you decide!