Is there anything more emblematic of domestic bliss than a husband and wife trading sections of the morning newspaper over the breakfast table? Well, it’s just a little different when both are scientists. So, it came as no surprise when Johanna, the molecular biologist, handed Robert a copy of the Proceedings of the National Academy of Sciences and asked him if he had read an article in it. He was glad she did as he might well have missed it and the story was a very good one. It led the two of us to envision another of those very rough days that occasionally affect Columbia County, and, at the same time, it may have solved several longstanding geological mysteries.

Geologists have long known of a series of enigmatic crater-like structures, scattered across the eastern coastal plain of North America. They are called the “Carolina Bays.” Elliptical and oriented from the northwest to the southeast, they have long suggested an ancient impact event, but we have never been quite sure. We have also long known of a puzzling thousand-year long cold spell called the Younger Dryas. Then there was the mystery of the extinction of the North American megafauna and the sudden disappearance of the Clovis Indian Culture. Many large mammals, and the Indians that may have hunted them, disappeared, or at least declined abruptly about 13,000 years ago. All these puzzling events may have recently been tied together with a thin seam of dark earth. Read on. 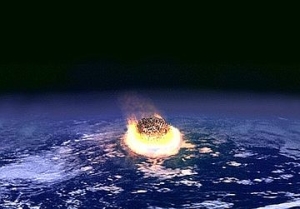 It seems a large team of high-powered scientists had recently described an inch-thick, carbon rich seam of earth that is found at sites across much of the continent. The seam is rich in iridium, magnetic micro-spherules, soot and glass-like, carbon-rich nano-diamonds. The seam, in the many places it has been found, is always dated at just about 12,900 years in age. It has been found at exactly the top of strata containing Clovis points, which is also the same horizon where mammoths and other large fossil mammals disappear. The age of this corresponds to the start of the Younger Dryas cold spell. The seam has been found to pass through a large number of the Carolina Bay craters. It is an incredible find; it ties together all the above-described scientific problems. But what exactly does it tell us?

The word iridium may remind you of the ash deposited by the asteroid which is thought to have wiped out the dinosaurs. If that catches your attention, it should. It sounds like we, all across North America, had our own mini dinosaur extinction event. From the composition and abundance of the impact materials it is estimated that the object was actually a comet, and it was four kilometers across.

If you know much about the turn of the century event in Tunguska, Siberia, then you can envision the story. Here in the Hudson Valley, we would have seen the comet coming in from the northwest at an oblique angle. At some point it exploded and the enormous impact of all this caused the great continental glacier below it (remember, this was still the Ice Age) to largely melt. Vast quantities of meltwater resulted. But the impact was so very hot that, not only did the ice melt, but farther south, vast stretches of forest caught fire. Huge widespread wildfires raged across North America. That’s where all the soot came from. An impact of this sort tosses huge amounts of rock and earth up into the sky. When it comes down, friction sets it ablaze and so even more fires are set. You get the picture.

The result is something that is often called a “nuclear winter” and that gets us to the Younger Dryas cold spell. The dark sooty clouds, generated by the impact initiated a cooling that would last for a full millennium. The extinction of about 30 types of large mammals suddenly has a natural explanation. The Paleo-Indians, it would seem, are off the hook for this crime. But human populations plummeted as well. It must have been a very difficult time for Indians and the Clovis Culture disappeared altogether. All this reminds us, once again, how fragile our existences are.

We wrote this years ago. Sadly, this hypothesis currently seems to be falling out of favor.