The enormous destruction inflicted upon New Orleans back in 2005 fulfilled warnings that many geologists had been making for years. The city lies below sea level, hiding behind man-made levees, and it was only a matter of time before river flooding or hurricane storm surges would overwhelm it.

At the heart of the problem is that New Orleans and all of the Mississippi Delta has been sinking. It’s the weight of the sediment that the river has carried onto the delta that has pressed down and caused the subsidence. Ironically sedimentation builds and maintains the delta, but at the same time, causes it to sink. In recent centuries, however, man has disrupted this process. We have built levees to prevent floods and they have mostly done that, but they have also kept those floods from carrying sediment to pile up onto the delta plain. Without those sediments the entire delta is doomed to continue its sinking, probably into the sea.

It used to be a lot like that in Oneonta.

Take Main Street south to Rte. 28. Turn right and begin the ascent up Franklin Mountain. Travel exactly two miles and you will see a sequence of red shales and sandstones along the left side of the road. You have entered the realm of the great Catskill Delta. A bit less than 400 million years ago a sizable ocean, the Catskill Sea covered all of central and western New York. Large rivers flowed out from New England and into that sea. Those rivers deposited a delta that easily matched the one in Louisiana. The sediments of that ancient delta are still around; they have hardened into the rock that we call the Catskill Mountains. Our mountains are a fossil delta. Those roadside red shales and thin red sandstones are the deposits of the Catskill delta plain. Much of that material is the product of the many floods that occur in such a setting. These are exactly the deposits that levees have kept from forming in Louisiana. What you need to know is that these sediments always accumulate at just about sea level. 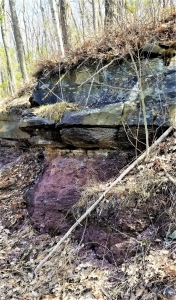 Gray sandstone, above, is river channel deposit. Red shale below formed on floodplain.

We have traveled about 50 feet uphill from our first sea level outcropping. We have probably also traveled through thousands of years of sedimentation, but we are still looking at deposits that formed at sea level. What gives? What happened long ago is that the Catskill Delta subsided slowly and, as it subsided, sedimentation filled in behind so that the net effect was no change in elevation at all; sea level was maintained.

Let’s drive up the road to the top. There, near the garage with all the hub caps is still another gray sandstone ledge. Again, we are looking at another delta river. And, of course, this one too was deposited at sea level. Now we have risen 200 feet and now, of course, the crust beneath us has subsided an equal amount.

Our journey illustrates the inevitability of what is happening to New Orleans; someday it too will sink 200 feet and by then it will be totally buried, a fossil city completely forgotten. Man can fight this with levees; man will lose.