The Woodstock Times; On the Rocks

Autumn is much too important to miss. The Hudson Valley, with its many scenic roads and bulging farm markets, is a lovely place to spend the autumn of the year. But as far as we are concerned, the place to be in this season is up in the mountains. Our Catskills are certainly at their best from the middle of September to the middle of October. They’re not all that crowded in this season either, especially if you are among those fortunate enough to be able to get out on a weekday.

One of our favorite locations in this season is Vroman’s Nose. “Nose” seems to be one of those peculiar local words. You see it used in the northern Catskills and Mohawk River valley. It refers to a small, but steep, mountain. Most of the noses that we have heard of are in the Mohawk Valley, but Vroman’s Nose is a fine one. It’s located in the Schoharie Creek Valley a few miles south of Middleburgh, close to Rt. 30. 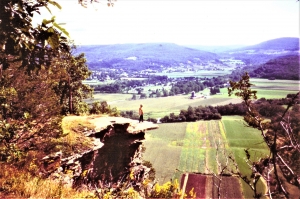 Vroman’s Nose is isolated from the rest of the hills in the region. This steep hill is sometimes referred to as the “sky island of the Schoharie.” Its morphology is the product of glaciation. Its peak was overrun by a glacier. The passing ice yanked loose large blocks of rock which left behind a south facing cliff. Above that is a beautiful glacially polished ledge called locally the “dance floor.” From the dance floor is a spectacular view of the lower Schoharie Creek valley. You can see for miles up the valley from up there.

Vroman’s Nose is almost entirely undeveloped and covered with forest. That might not have been. We have heard that some time ago there were plans to either sell the land for building lots or even to construct a motel up there. Talk about a room with a view! At any rate, the thought of developing the site alarmed many in the local population, especially the still abundant descendants of the Vroman family. One thing led to another and soon there was a Vroman’s Nose Association. This group of good neighbors was able to raise enough money to purchase the site. Now Vroman’s Nose is a community park, open and free to all.

Drive north along Rte. 30. You won’t have much trouble identifying the sky island; you’ll spot it miles away. Across the highway from the nose, if you watch carefully, there is a home with a box marked maps. Wally Van Houten, a retired earth science teacher, lives there and takes care of the mountain. The map shows three trails to the summit of the nose. The green trail is the best for family hiking. It’s the long way, but the slope is gentle. The red trail ascends straight up the steep front of the mountain, and it can be a very difficult climb. The blue trail is the “Goldilocks” trail, it’s just right.

On your way up you will pass a number of exposures of dark, fine-grained sandstones. These belong to the Devonian Hamilton group, and they run about 375 or so million years old. These sediments made up the floor of the Hamilton Sea that was once here. It was a relatively shallow water, mud bottomed ocean. The dark color tells us that, unfortunately, there was relatively little oxygen in the quiet sea floor. That means that few animals could survive and indeed there are not many fossils to be found on Vroman’s Nose. We have found a few shellfish, brachiopods mostly, and there are some worm burrows as well. Not much of a haul.