Birth of a gorge

On the Rocks the Woodstock Times, Sept 2011

We are the mind’s eye, the human imagination and we are located about where Stoll Road is today. The date, however, is Jan. 15, 18,608 BC. This, it will turn out, will be the coldest day in the history of Woodstock. Tonight, the temperature will plummet to 63 degrees below zero. This is the peak of the Ice Age but, even so, that sort of temperature is extreme. 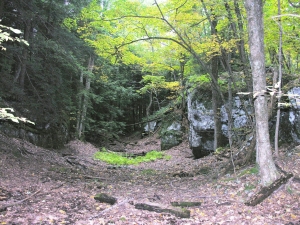 We look around and, even though it is late afternoon, all is very dark. We are at the bottom of the Hudson Valley Glacier and a few thousand feet of ice lie above us; no sunlight will be seen here today.

If there is no light, there are at least a few sounds to be heard. From time to time there is a low groaning. Then too, there are occasional loud snaps that echo through the ice. These are the sounds of ice under intense strains. The glacier is frozen solid, and it should not be moving, but there is a constant pressure from the north. Back in Labrador the glacier has been slowly accumulating new ice and the weight of that ice, here in the Hudson Valley, is being translated into a southward shove.

We, the mind’s eye, rise up through all of the ice and ascend into the Arctic sky. Below us and all around we see nothing but the flat white of a great ice sheet. We climb higher into the sky and then disappear into the vastness of time. The mind’s eye can do that . . .

When we reappear, we are back in the Stoll Road vicinity. It is August 8th, 14,387 BC. All around us, it is still black; the Hudson Valley glacier still covers all of our region. But that will not last. Today, above the ice, the temperature will climb to 63 degrees above zero, the hottest it has been here in about 9.000 years. Up above, the ice is melting and melting quickly.

That is why it is so noisy all about us. Again, the glacier is groaning and popping; the ice is now very unstable, sinking here and there and lurching to the south as well. But there is more: now there is a low roaring sound in the distance. Nearby there are gurgling noises as well and these are pretty loud. The glacier is melting, and enormous volumes of water are draining through the ice. We cannot tell it from down here, but the ice is thinning. Once again, we disappear into the ether of time.

Now it is 600 years later; the date is July 14, 13,787 BC and during these 600 years most of the Hudson Valley ice has melted away. The climate has continued its warmup. Now, all around us, is the very loud roar of flowing water. We find ourselves in a powerful current of water. We are within a sub-glacial stream. It’s a raging torrent of ice water which has originated from the melting glacier, drained through the ice and formed into this stream. The current would kill mortal humans, but we are the mind’s eye and cannot be harmed. We can stand still in the flow, if we want, or we can drift along with it, if that is preferred.

We stand in the current for a short period of time and feel the pressure of the passing ice water. Not infrequently, large blocks of ice pass by. It is clear that we are watching the very disintegration of a great glacier. Suddenly, and with a loud crash and violent splash the icy roof of this stream caves in. Now sunlight shines where it has not been for thousands of years

Over a period of days we watch as more and more of our stream’s roof caves in. We soon observe that this flow is something that one day in the distant future will be called Sloan Gorge. We are privileged to be there at its birth. The current is so powerful that it transports great blocks of rock. We can watch boulders as they bounce by, buoyed by the pressure of the flow.

The river we see here today is a raging, foaming, angry torrent. Its powerful flow is enormously erosive; it is carving the canyon that today’s inhabitants of Woodstock are familiar with. The flow is dense with sand and that exerts a powerful abrading force on the bedrock. Sloan Gorge is having its violent birth. We, once again, disappear into time.

We reappear and it is August 24, 2008. Sloan Gorge is its modern self. It is not a torrent; in the late summer it is a place with little water at all. Sloan gorge is what geologists call a “paleoform.” That’s a landscape that is an anachronism; it belongs to that other time: the time at the end of the Ice Age. But, we are the mind’s eye and it has been our privilege to see the Gorge as it was.

Contact the authors at randjtitus@prodiy.net. Join their facebook page “The Catskill Geologist.” Read their blogs at “thecatskillgeologist.com.”