Sometimes it’s well to pause and take stock of things. If you have been reading these columns the past two years, then you have been introduced to a rather eclectic view of the Woodstock area landscape, our landscape as a geologist sees it. The column is meant to be as much for fun as for education, so we have not tried to be too serious, or too focused. The column is not a formal course in geology, and you won’t get college credits for it. Still, this week, why don’t we try to draw together some of the many strings we have been following. There’s a nice afternoon trip that can do just that too.

The road we have in mind is a venerable one, it’s County Rt. 32, but it’s better known as the Glasco Turnpike, and it cuts through a lot of geology. Pick up the pike at its intersection with Rte. 9W, at Glenerie. All along the east side of 9W you will see the Helderberg Limestone. This represents Woodstock in the early Devonian Period, about 400 million years ago. The limestone formed on the floor of a shallow tropical sea. There’s good fossil hunting here, shellfish that lived upon the soft sands and inhabited the clear waters of an aqua colored “Bahamas

Woodstock, however, has not always been such a nice a place as it was during Helderberg times. Cross the bridge at Glenerie and head west on the pike. You will pass a great outcrop of black shales. We have traveled in space, but more importantly, we have traveled in time. This is Woodstock at a younger and very non-Bahamian time. Off to the east the Acadian Mountains were rising. Curiously, as mountains rose in New England, here crustal subsidence created a deep basin. When we visit those shales, we enter that basin: A deep, dark, mud-bottomed sea that replaced the Helderberg. There was nothing very pretty about this moment in Woodstock’s past. In fact, this ocean could be downright ugly. It was definitely inhospitable, a deep and dark, and sometimes even poisonous sea where few creatures could endure.

Continue west on the pike, cross the Kings Highway, and then the Thruway. About a half mile down the road you will reach Plattekill Creek. To the left, a very impressive cliff towers above the road and the creek. That’s the Mt. Marion Formation. It represents the last stages of that deep, mud-bottomed sea. The shales can be good fossil hunting, if you are patient. Horn corals and other fossils have been found here. Near the top of the exposure you will notice that there are thick ledges of gray sandstone. That’s important; the seas were at last shallowing and strong coastal currents were carrying masses of sand to the Woodstock area. 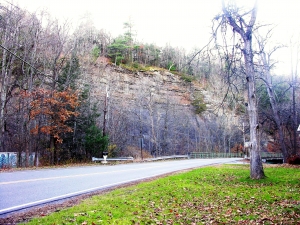 As the Acadian Mountains continued to rise in New England, the seas here once again shallowed and the coastline advanced westward. We call that a marine regression. Let’s see the results. Drive uphill from Plattekill Creek. Soon you will start passing very thick ledges of gray sandstone. There is a pattern to the road from here on to the west as far as you care to go. The pike will commonly rise up over a ledge of sandstone and then dip down into a swale beyond. Soon another ledge appears and the road rises again, only to drop down still one more time. And so on it goes down the road. Each sandstone ledge is the cross section of a Devonian river. Each swale is composed of dark, soft shales; they were deposited in coastal lagoons or on marshy coastal flood plains. Our regression has brought us out of that deep ocean basin and into the coast of a great delta complex.

The delta has a name, the Catskill Delta, and you pass into the heart of it as you cross Rt. 212 and continue west on the pike. Along the side of the road you will see more thick river sandstone ledges, much like those behind us, but now there are also many red shales. Red is a common color among terrestrial sediments, and these are the deposits of the flood plains across which the rivers flowed. There were once forests on these flood plains. And also, the Acadian Mountains towered above, perhaps as high as today’s Himalayas.

Our trip it over, but it has taken us mountains of nearly 400 million years ago through a lot of geologic history and it has given me a chance to organize a number of themes that I have written about these last two years. I hope you can get a chance to follow the Glasco Turnpike, see its history, and maybe begin to really understand the Acadian Mountain building event. After all, the Acadian Mountain building event pretty much made Woodstock.