As you drive up Rte. 23A and approach Kaaterskill Clove you can look upwards and see two great sandstone cliffs, way up toward the top of South Mountain. The higher of the two is known as the Palenville Overlook. It’s an out of the way site with a lot of geological history.

The Overlook is not hard to get to, but you do have to know the way. Start at the parking lot at North Lake and head due east toward the escarpment. You will find a marked snowmobile/horse trail there. It used to be the historic mountain road that brought carriages to the old Catskill Mountain House Hotel. Follow it downhill which takes you north, then watch for a right branch and take it. There’s a sign pointing toward the overlook. You will then be heading back to the south and you will soon cross the gash in the forest where the Otis Elevated Railroad once passed. Keep going south on the trail for a half hour or so until you reach a left fork. That fork continues to take you south and, in another ten minutes or so, you have arrived at the Palenville Overlook. It’s best to bring a map.

You won’t have any trouble knowing that you have gotten there. It’s a grand location; below yawns Kaaterskill Clove at its widest and deepest. Immediately to the west is another ledge called “Point of Rocks.” We haven’t been there yet but it appears to be a Palenville Overlook twin. Beyond the twin is all of Kaaterskill Clove itself. The Overlook is a place worth visiting at different times of the day and different seasons of the year. On many mornings there is fog in the valley below. As the day progresses the fog lifts and the great view emerges. Golden, in this autumn season, it will soon turn gray and then, as the cycle of the seasons continues, light and dark greens follow. 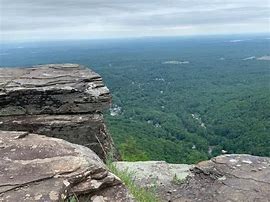 To the east is the expanse of the Hudson Valley. A geologist can’t help but to imagine the past when he looks into the valley. The great flat width of the valley floor below was the site of glacial Lake Albany at the end of the ice age, maybe 14 or 15 thousand years ago. It’s also easy to imagine the large valley glacier that was once down there as well.

Like any good geologists, we wondered how the ledge got there. The first hint that we found was along the horse trail. Not surprisingly, there are some stretches of the path that cut across bare bedrock. Some of that bedrock had been scraped, ground down and polished by the passage of a glacier, maybe 20,000 years ago. The grinding passage of the ice carved striations into the bedrock and these have a north-to-south orientation; the glacier had headed this way long before we got there.

That’s pretty much all we had to know to figure out what had made the Palenville Overlook. That glacier was probably part of what is known as the Wisconsin ice sheet. As early as 22,000 years ago the ice had completely submerged South Mountain and was advancing southward across it. When a glacier reaches a cliff, it very often breaks loose large blocks of rock. We call that process “plucking.” Not that anyone has ever seen plucking; it’s something that only happens at the bottom of the ice, but we can imagine what went on down there. There may have been a couple of thousand feet of ice here back then, and the weight of all that ice pressed down heavily upon the bedrock. That’s how the grinding, polishing and striations came about, and it probably also has a lot to do with the plucking. It seems that the thick ice presses onto and adheres to the bedrock. Then, as the ice moves on to the south, it literally yanks loose large blocks and drags them off. What is left behind is a jagged scar, the plucked cliff.

Plucked cliffs are very common throughout glaciated mountainous areas. There are a large number of them in the Catskills. Here in Woodstock, you can climb Overlook Mountain and see a good plucked cliff at the top of Lewis Hollow. That’s the cliff right in front of the old hotel ruins. The very same glacier that overrode Palenville also passed across Overlook and left the same features behind.

It’s autumn in the Catskills. You should never let this season go by without getting out. Palenville Overlook is just the sort of hiking goal that makes the season the grandest of the year.