Middle and late summer often brings the dry season of the year to the Catskills. The streams run dry or nearly so. The cobbles and boulders become light with a coating of dry and bleached algae. Nervous fish circle in the remaining pools of unhealthy, stagnant water. Along the stream banks, dry weeds have a lifeless look to them. If the plants are thirsty, then it’s at least partly their own fault: They have drawn so much water out of the ground.

It’s not a pleasant time of the year for those plants and animals that depend on lots of water and it never has been. Our August cycle is just this year’s edition of something that always has been, and probably always will be. It’s hot in August and when it’s hot things dry out. If we said that it was like this back in the Devonian time period when the Catskills were a great delta complex, we think that you might believe us. But if we said that you can go and still see some of the damage done during Devonian droughts, we would expect at least some skepticism. And yet it is so.

Sedimentary rocks, take sandstones for instance, are records of conditions as they were when the sediments were being deposited. Our Catskill sandstones were deposited in a multitude of delta environments, but one thing was certain. When there were droughts, pretty nearly the whole delta dried out. And that is reflected in the sedimentary rocks.

Sediment is generally deposited in some sort of watery environments. Catskill sediments were deposited in streams, ponds, pools, marshes and all sorts of watery settings. So, they were very nearly always wet upon deposition. But that didn’t mean that they would stay wet. Back in the Devonian there were dry seasons and dry years. Ponds and pools evaporated, shrank and dried up. Even rivers could run dry in the worst cases. Similarly soils and sediments dried up as well, although we geologists like to say they “desiccated.” At any rate, the last thing to happen was that the still wet muds at the bottom of any body of water were exposed to the sun and began to dry out. The clays within them would begin to shrink and so too would the whole mass of sediment.

Mud does not just dry out; it begins to divide into many small individual masses. Each of these continues to dry out and shrink towards it’s own center. The result is a maze of interlocking polygonal blocks. We call these “mud cracks.”

All this kind of explanation works better if you can go outside and see some of these features. Drive up to Kaaterskill Clove and find a place to park near the clove’s first legal parking. Then hike up to a fine waterfall, Fawn’s Leap. There is a bridge below the falls and below that bridge you will find a prominent ledge of very red sandstone. Climb down and look carefully. It shouldn’t be long before you see some green mud crack polygons, standing in sharp contrast to the red sandstones. That’s them. 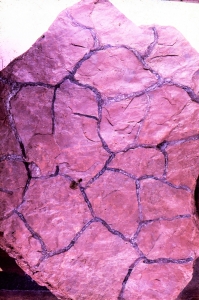 It’s very kind of nature to give us those color contrasts, but there is nothing magical about it. Mud cracks tend to fill with quartz sand while the surrounding muds were rich in certain clay minerals. These clays tend to oxidize in the presence of air and that turns them red. The mud cracks, being of a different mineralogy and maybe being a little more waterlogged, don’t turn red, they turn green. Presto! Sharp contrast.

A mud cracked surface can be a lot of fun to crawl around on and study carefully. You can sometimes find insect tracks or bits of plant fossils. Raindrops prints are found where the rocks record a brief shower that interrupted the drought. Once I found a complete fish skeleton. The poor animal had died as its pond slowly dried up. As I said these are bad times for plants and animals. That’s the wonder of it; the rocks are records of the past. They speak to us of awful, killing droughts of long ago. Animals suffered in the heat and died painful deaths alone in the dust or dried out pools. But that was back in the Devonian and nobody cared, nobody mourned, nobody pitied. And, in the end, only the rocks remember.