Feeling out of place at North Lake

We are all very fortunate to have a place such as the North-South State Campground in our region. It has been a very popular draw for visitors since the early 19th Century and for good reason. It must be one of the most picturesque landscapes east of the Mississippi. The park sits atop the Catskill Front, overlooking a 70 mile stretch of the Hudson Valley with many breathtaking views.

There is a lot of geology to be seen in the park, so you have to make up your minds on what to do. You will want to walk around North Lake at, we hope, a leisurely pace. The walk will start at the Mountain House site parking lot and head north until you circle around most of North Lake and then return.

So, what is the geological “bait?” Well, mostly it is the Ice Age history of North Lake that you will want to explore. Both North and South Lake basins were scoured out by the glaciers, probably at the very peak of the Ice Age. Glaciers filled the Hudson Valley and then rose up and streamed into the area. You will want to walk along the eastern shore of North Lake and take a good look at the bedrock evidence of this. This rock records the passage of the ice. It’s actually been ground down and polished by the advancing glaciers. But the most striking features along the lakeshore are the striations carved into the rock. The glaciers dragged rocks along with them, and these gouged the rock. It’s a lot of fun to spot these and take note of them.  Each striation has the very same compass direction as the movement of the ice. Each is thus a history of Ice Age activity at North Lake.

But what we like even better than the striations are the Ice Age features that are called “erratics.” These are boulders, often very large, which were carried here by the moving ice. Glaciers are quite capable of lifting very large rocks and sweeping them along. We have been finding erratics here in abundance. Some of them are famous; maybe you have seen the one called Alligator Rock.  It, in fact, does look like the head of an alligator. It even has a large open “mouth.” People have been putting stone teeth in that mouth for as long as they have been coming here. 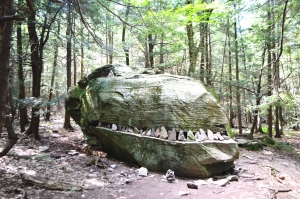 This great rock, and probably scores of others, dot the landscapes at North Lake. We think the largest number of them are found on the point that separates North and South Lakes. But there are many more, all around the lakes. What are they and where did they come from?  Well, the history of any erratic begins when ice was passing across its home bedrock. The ice tended to stick to that rock and, as the glacier advanced, it plucked the boulders loose and dragged them off. That’s what’s erratic about these rocks; they don’t match the local bedrock. The glaciers eventually melted and when they did, they left those erratics behind, right where we see them

There’s more to the story.  Erratics are clustered in the North Lake vicinity,

suggesting they all came from the same glacier. When you get to North Lake, you

should look up to North Point and see where that glacier came from. Near the top of

North Point there is great basin, just below the peak. Geologists will recognize this as

what is called a cirque. Cirques are the basins in which Alpine glaciers had formed and

from which they began their downhill journeys. We will look up at that cirque and in our

mind’s eyes we will see an Alpine glacier. We will watch as it slowly descended the

slopes of Mary’s Glen, heading toward North Lake. We won’t be able to see them, but

that glacier was ripping up our erratic boulders and carrying them along for the ride. We

will watch long enough to see the climate warm and the ice melt. It is then that those

boulders will be left behind