We have seen some pretty cold weather lately. November 12th and 13th witnessed what was called “historically cold weather.” Forecasters warned that this may be repeated, perhaps many times this winter. Specifically, they predict that cycles of cold Jet Stream air masses will pass slowly across North America during this year’s winter. Each pass is expected to bring similar “cold snaps.” Each cold episode can be an alarming event. How many times have you heard people say, “What happened to climate warming?” That’ a fair question, so we would like to give answering it a try in today’s column. Our argument is that there is, indeed, an explanation for this weather, and it may actually be that has been caused because of, not despite global warming. Obviously, we have a lot of explaining to do.
Let’s begin with a short overview of what the jet stream is. In North America the jet stream is a massive, high-altitude eastward flow of air lying at the boundary the Arctic and the Mid Latitudes. The stream typically undulates up and down through broadly prominent ridges and troughs. See our first illustration. It’s the temperature difference between the cold Arctic and warmer Mid Latitudes that drives the jet stream; the greater the difference, the faster the jet stream. That difference drives the cold troughs and warmer ridges across America. That brings a lot of weather to us, especially as it did in what came to be called “Novembruary.” 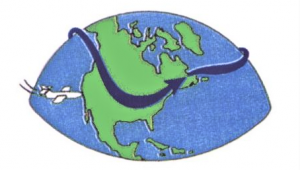 Normal jet stream, Illustration courtesy of Wikimedia Commons.
In recent decades there has been a consistent and pronounced warming of Arctic realm climates. That’s something we remember that climate scientists predicted at least 30 years ago. At the same time the mid latitudes have only warmed a little, so the differences have been greatly reduced. That has, as would be expected, slowed down the movements of those ridges and troughs. What results is a lot like what happens to auto traffic when it is slowed down. The cars behind catch up with those in front. The ridges and troughs become slower and more closely spaced. But there is more; in order to keep all those air masses moving, both the ridges and troughs must become more expansive. See how, in our second illustration the ridges and troughs are so accentuated. We call this a higher amplitude. 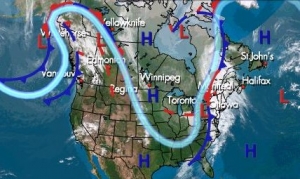 High amplitude jet stream. Courtesy US Geologic Survey
Each trough is a mass of slow moving very cold weather. Just what we saw in middle November. Each trough becomes at least a few days of very cold weather. Each expands far to the south and spreads across a vast expanse of our continent. We all, especially in the south, find this most unsettling. But, as you can see, it’s all a very explainable phenomenon. We think it is something that you should understand.
In the end we are hoping that you will pay more attention to the jet stream part of your local weather forecasts and have a better understanding of what they have to tell.