Top of the Mountain
The Devonian of Greene County Part 13

The Greenville Press
Oct. 6, 2006
Updated by Robert and Johanna Titus

It was been a long time ago, November [2005], since we wrote our last installment on the geology of Greene county. We are sorry for the delay. But now it is high summer, and it is time to finish up our saga. When last we left off, we were at North/South Lake State Park, heading north on the blue trail. We had also been traveling through the great Devonian age Catskill Delta. We had been looking at gray sandstones that were deposited in the ancient delta’s rivers, and red shales that had originated as soils in between those rivers. Our trek had taken us almost to Sunset Rock. Let’s belatedly resume our hike.
The blue trail follows a course that takes hikers just west of the knob of rock that displays Sunset Rock. That stretch of the trail takes you along a shady route that has a towering cliff above it. That cliff is composed of remarkable sedimentary rocks and these tell the story of a changing Devonian landscape. This cliff is largely composed of a very coarse-grained sedimentary rock called conglomerate. The unit is called the Twilight Park Conglomerate. The grains are pebbles and cobbles. Many of them are very much rounded. Remarkably they are stream worn and that is key to understanding them. 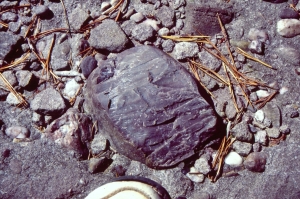 These cobbles indeed did travel in Devonian age streams and along the way they came to be rounded. You can see this in many modern rivers. It is important to understand that it takes a powerful flow of water to carry cobbles along in a stream. That kind of current can only occur where the stream is descending a steep slope. The steep slopes we are speaking of were the lower slopes of the Acadian Mountains.
We have mentioned the Acadians before in this series. Off to the east, in what is New England today, was this great rising chain of mountains. They did not yet exist during deposition of the early Devonian limestones that we saw along Rte. 23 in Leeds. They were just coming into existence at the time of the black shales we visited north of Greenville on Rte. 32. They were getting fairly well elevated during deposition of the early Catskill sandstones that we visited as we ascended Rte. 23 going toward East Windham. But now, at the time of the Twilight Park Conglomerate, the Acadians had developed into very tall mountains. Indeed, many modern geologists suspect that the Acadian were as tall as today’s Himalayas. Look east across the Hudson and imagine that!
Great, powerful, white water streams must have descended the Acadian slopes and often these carried gravel and cobbles. That is what we see in the Twilight Park. Take a good look at these and you will not have to be a very good geologist to recognize that there are a lot of different types of rock that make up the cobbles. These are all that is left of the Acadians; you are looking at fragments of ancient mountains and those mountains were made of all sorts of different types of rock. It is just a bit awesome to realize that all of the rest of the mountain chain has weathered away to a virtual nothingness. You are looking at the last fragments of mountains.
Continue north on the blue trail and, if you want to, take a side trip down the yellow trail. It will take you to Sunset Rock with its fabulous view of North and South Lakes. Our journey, however, will take us farther along on the blue trail. We will first see the Newman’s Ledge cliff, to our left, just short of the yellow trail and it is that ledge that continues our story.

Newman’s Ledge is a massive unit of gray sandstone. It is many tens of feet thick and that is a lot of stratified rock. It is composed of river sandstones; all of the rocks you see were once the deposits of river channels. You will see most of the river features we visited last autumn. There are cross-bedded sandstones that accumulated in the fast flowing, deep parts of the channels. Then there are flat bedded sandstones that formed out in the middle of the channels. There are a few concave surfaces, and these are small, petrified channels that formed within the river complex. It can be a bit confusing, but for our purposes the simplest way to view this sandstone is as a massive complex of rivers sands.
In this sort of science, the hardest thing to see is what is not there. It takes a while but eventually you notice that the are virtually no red shales along this elevated stretch of the trail. We had seen a lot of these along Rte. 23 as we ascended towards East Windham, but we will see almost none of them for the rest of our climb at North Point. What happened?
Red shales are typical of inter-stream areas, bits of floodplain between delta river channels. Such landscapes are flat and low-lying. If these deposits are missing, then these habitats must also be missing. Our guess is that, once again, we are ascending the lower slopes of the Acadian Mountains. You can’t have low-lying, flatlands on a slope so you can’t have the red shales. Instead, we are imagining the lower Acadian slopes as being draped with great masses of sand. The rivers that flowed across those deposits were themselves glutted with sand and when they hardened into rock, they produced what we see at Newman’s ledge.
In other words, our journey across the Catskill Delta plain has ended and our ascent of the lower Acadian slopes has begun. And that will pretty much be the case for the rest of our ascent to the top of North Point. If you continue up the blue trail you will ascend Newman’s Ledge itself. Notice all of the very large cobbles that are displayed at the top of the ledge. Soon the blue trail will head into the forest and continue toward North Point. It won’t take long before you reach Bad Man’s Cave. Here you will see another massive ledge of cross-bedded sandstone. It is very much a match for Newman’s ledge. There is a little red shale here, but just a little.
The trail continues with relatively long, flat stretches and a few ascents through more sandstone ledges. Eventually, however, we reach the last incline that leads to the top of North Point. It’s a steep final climb but well worth it. The view from North Point is one of the best in all of the Catskills. Before us are North and South Lakes. Then there is South Mountain and a glimpse of Kaaterskill Clove. Best of all is the seventy-mile stretch of the Hudson Valley running from Kingston to Albany.
All around, however, is more strata of sandstone. And they continue to speak of rivers, struggling across sandy landscapes at the base of the Acadian Mountains. It is one of the ironies of Catskill geology that the climb to the top of one mountain range takes you to the bottom of another.
We have reached the highest and youngest rocks of this part of Greene County and thus our journey through Devonian time has ended. We do, however, still have one more episode to go.