Our journey through the Devonian of Greene County has slowly and gradually carried us uphill. Our first chapters were along Rte. 23 in Leeds, not much above sea level, but gradually we have worked our way up and have recently been climbing Rte. 23 towards Windham. We are getting toward the highest elevations of Greene County and that’s where our story will eventually end.
Today let’s travel to North/South Lake Campground and continue our trek. It’s late in the season now and good weather is getting hard to find, but there still may be time. The park is closed now, but you can drive to South Lake and park there. It’s only a modestly long hike to where we would like to start today. Let’s meet on the ledge at the Mountain House site. The cliff beneath us is about 30 feet of light gray sandstone. These, we have recently learned, represent Devonian age river channels. We are looking at something that geologists call the Oneonta Formation. It is a complex of river and delta plain deposits which is quite extensive. The unit is hundreds of feet thick and it extends all across the Catskills to Oneonta and beyond. It makes up a sizable portion of the Catskill Delta, the enormous deposit that, in turn, makes up much of the Catskill Mountains.
There were two dynamics going on during deposition of the Oneonta Formation. First the crust of the great Catskill Delta was subsiding. Then, as it subsided, the delta’s rivers migrated back and forth across the delta plain and they deposited all the sediment that eventually hardened into the rocks that make up the mountains today.
These wandering streams are called “meandering rivers.” They literally snake back and forth across the delta plain. One side of the river has a deep channel, with fast flowing currents. This is the erosive side of the stream. The other side is shallow with relatively slow currents. There deposition of sediment occurs. With erosion on one side and deposition on the other, you can see how rivers can migrate. That allows them to lay down great thick layers of sediment all across the delta. But, by the time they have migrated “back” and then “forth” the crust beneath them has sunk. The forth deposits thus end up being laid down on top of older back river sediments. This happens again and again, and thick sequences of sediments pile up. Each back and forth sequence runs about 50 feet thick and is called a “story.” Is that confusing? Well let’s go see. It might make more sense in the field.
Take the unmarked trail south from the Mountain House site and follow it a very short distance. You will very soon be climbing uphill. You will pass across red shales and red siltstones. These, as we have seen in recent chapters, represent the delta plain deposits. Some of them were flood sediments; some of them are delta soils. If you continue uphill, you will soon encounter a great overhanging ledge of sandstone. The thick sandstone represents another river channel complex. The Mountain House ledge and this overlying delta deposit represent the first two “stories” on our journey.
Take a look at the underside of the large ledge we have just climbed to. You are actually looking up at the bottom of an ancient river. Look around and you will see small channels cut by Devonian river currents into the floor of that stream. To realize that you are looking at the evidence of nearly 400-million-year-old currents is quite something. 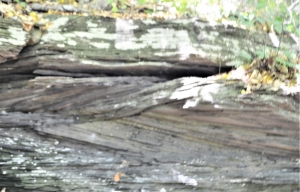 Turn around and find your way north past the Mountain House ledge and start up the Blue Trail towards Sunset Rock. You won’t have to go too far before you will encounter another great sandstone ledge. The climb up it is quite a scramble. Along the way we would like you to look for what we call “cross bedding.” The strata are inclined to the left here and to the right there. The two sets intersect each other. We are again looking at evidence of ancient river currents. These formed in the deepest, fastest flowing part of the river. Currents first scoured the channel sand this way and then that way; the results hardened into the sandstones that you are looking at. With some searching you may find sandstone strata all dipping in one direction; these are called “planar cross beds.” These represent what were, essentially, dunes of sand that had been migrating in a downstream direction. The beds dip in the old downstream direction. Then too, you may also pass by horizontally bedded sandstones. These formed in a quieter part of the stream; it was shallower here and the flow was much less.

Planar cross bedded sandstone below; horizontal beds above
Again, what a marvel all this is? We are looking into the deep past and seeing the very currents of very old rivers. Each grain of sand came to rest during the Devonian and each one has not moved one bit in all the time since, and that is about 375 million years.
Our hike will take us farther north along the Blue Trail. We will pass “Artist’s Rock” and that represents another ancient stream story. Eventually we will find our way to what has been called “Sunset Rock.” (It probably should be called “Bear’s Den.”) This is one more great sandstone ledge and, of course, it represents another complex of stream channel deposits. Look for more cross bedding and horizontal laminations along the way. You may see some more of those red floodplain deposits as well. The view from this site is one of the greatest in all the Catskills. We will end today’s hike here.
We are getting towards the end of our Devonian saga, but the blue trail continues north and climbs to higher elevations. We will come back soon and continue our journey.

Contact the authors at randjtitus@prodigy.net, Join their facebook page “The Catskill Geologist.” Read their blogs at “thecatskillgeologist,com.”