The Devonian of Greene County Part 11
The Red Delta
The Greenville Press
June 5, 2006
Updated by Robert and Johanna Titus 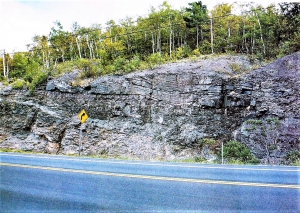 There is nothing whatsoever unusual about this East Windham sedimentary sequence, these thicknesses are typical of large deltas. And that includes New Orleans. Beneath New Orleans there are many, thousands of feet of sediment that were all deposited at sea level. Above New Orleans there will someday be many thousands of feet more. That will take many millions of years. And after all of that sedimentation, the area will still be at about sea level. And that’s where we really come to understand what has happened to the (once great?) city. Over the centuries, as it was being built, it was being dragged downward along with the subsiding crust. Nothing can stop that process. New Orleans will continue its subsidence. And no matter how high we build the levees, Nature will eventually catch up (as it already has) . . . again, and again, and again. In the end New Orleans will be a “fossil” buried under hundreds and then thousands of feet of sedimentary rock.
Today Rte. 23 takes us to a wonderful place; there is great scenery here. On one side of the highway are beautiful red stratified rocks, on the other side is one of the best panoramic views of the northeast. To relate all this to the tragedy in New Orleans leads to some pretty somber thoughts. It is almost a sacrilege, but it is what we see as we drive up the highway towards Windham.