Name Your Poison
On the Rocks/
Updated by Robert and Johanna Titus
June 18, 1998

Black sedimentary rocks are occasionally seen in the Hudson Valley. Recently, we described some along Rt. 209, south of Sawkill. The dark appearance of these strata makes them remarkably eye-catching and, when they make up tall cliffs, they loom, dark and menacing, over the landscapes.
It’s the shiny, jet-black shales that we are talking about. They are often rich in undecayed organic matter; it’s the carbon that makes these rocks black. This generally suggests to the geologist that there were low-oxygen conditions in the sea waters at the time of deposition. Without oxygen, most decay bacteria cannot function; they die before they can completely destroy the organic matter. But why low oxygen? That takes us back in time.
Back in the early Devonian Period, these shales were accumulating in a deep sea, immediately adjacent to the rising Acadian Mountains of western New England. Thick soils formed on the rapidly weathering mountainsides. The soils were easily and rapidly eroded and provided sediments that were eventually transported into the nearby Catskill Sea. This material was rich in dissolved nutrients, such as nitrates and phosphates. They fertilized the water and that led to the next step in what was to be a complex chain of events. 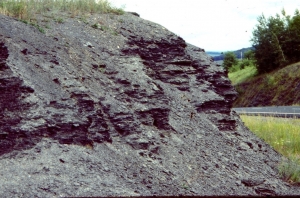 The fertilized waters were ideal for algae; they experienced algal blooms, great population explosions in the surface waters of the Catskill Sea. A whole ecology became established as dense mats of floating, or planktonic, plants and animals grew, somewhat similar to that of today’s Sargasso Sea. While all this was great for the plankton it was deadly for just about every other category of marine organisms. As the plankton died, they were attacked by decay bacteria; the algae bloom led to a bacteria bloom. But the decay process consumed so much oxygen that the seas soon became oxygen-depleted. The hapless bacteria had, in effect, poisoned their own habitat, because they needed oxygen too. Their numbers quickly plummeted and very soon, all types of animals, as well, suffocated in the oxygen depleted sea. But the algae just kept on proliferating in the surface waters where there was plenty of oxygen, diffusing in from the air above. Soon, large masses of undecayed biological material were sinking to the floor of the ocean. The climate was tropical, and the nearby coastal lowlands provided lots of vegetation, much of which drifted into the basin, adding more organic matter to the black shales. Almost all of these organics accumulated as thinly laminated, shiny black shales.

Back then, the Catskill Sea was largely isolated from other deep bodies of water; it was nearly surrounded by land or very shallow water. To its east, land blocked weather patterns and shielded the basin from most storm activity. All of these conditions promoted what are called stagnant, thermally-stratified waters. The sunbaked surface layer was hot, while deeper water remained cool. Depth stratification and a dense planktonic mat combined to prevent agitation and mixing of the waters, causing stagnant sea floor conditions to develop. Virtually nothing could live in this sea, except at the surface where there was always plenty of oxygen. This was truly the poison sea.
Many of the earliest Catskill shales are jet black, and they form the Bakoven Shale at the base of what is called the lower Marcellus Group. As we have seen, they are the record of the Catskill poison seas. The upper beds of the Marcellus Group are similar looking but very different deposits. These are fossiliferous black shales and dark gray sandstones. They sometimes have rich assemblages of brachiopods, clams and even corals. These were still mud-bottomed seas, but they were deposited at times when there was a fairly large amount of oxygen in the water, at least enough to allow marine shellfish to survive and even flourish. These can be fun rocks to poke through as they are occasionally richly fossiliferous, and the preservation of those fossils can be very good.
See the Bakoven Shale on Rt. 23A where it crosses Kaaterskill Creek east of Kiskatom. Go visit that large outcrop along Rt. 209, between Kingston and Sawkill. The far south end is the real poison sea; as you travel upwards and north from those beds you are looking at shallower waters which had more oxygen.