A Petrified Delta?
The Catskill Geologists
Updated by Robert and Johanna Titus

We’re back! Did you read us back when The Mountain Eagle was part of Columbia-Greene Media? Well, here we are again. We will be making frequent contributions to the “new” Mountain Eagle and hope you will be watching for us. We are Robert and Johanna Titus, and we have a long history of writing geology columns here in the Catskills. Run a search on us and you can learn a lot more.
When you begin writing for a newspaper the first thing you ask is about where does it circulate. The Mountain Eagle can be found throughout all of Schoharie County and a good part of Greene and Delaware Counties. That is the heart of the Catskills and that gives us a lot of geology to write about. So, a good place for us to start today is to describe the geology of our mountains in the broadest terms. Let’s ask a deceptively simple question: What are the Catskills?
And (without a drumroll) the answer is – the Catskills are a petrified delta. A what?? Does that surprise you? Well then, maybe you need to start learning some geology. Let’s begin by looking at a typical outcropping here in the Catskills. See our photo; the upper half of this outcrop is typical Catskill sandstone. It’s often called bluestone, but it is actually brown to gray. There is a lot of similar sandstones found throughout the Catskills. We would like you to be watching for these stratified rocks as you travel around.
That sandstone was once sand and that means there must have, long ago, been an environment of deposition that accumulated this sediment. What was it? Geologists have been studying these sandstones for more than a century and they have concluded that these sands were deposited in the channels of ancient rivers. When you find a thick sandstone of this type, we would like you to pause in front of it, and imagine the currents that once passed through right where you are standing. Hold your hand up and feel those long-ago currents; you are now using your mind’s eye, and you have traveled into the distant past; what geologists call the deep past.
How old are these sandstones? Geologists have been collecting fossils in the Catskills for almost two centuries. The ages of these fossils goes back to a time called the middle Devonian. That makes these stratified rocks roughly 380 million years old! Can you imagine anything being that old? 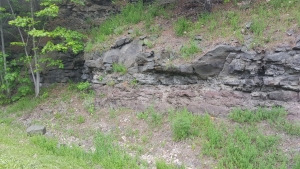 The strata at the bottom of our photo are red shales. The key is the color. This sort of red is an iron oxide, typical of an ancient terrestrial setting. These shales were originally muds and they were deposited in what geologists call overbank settings. That means these red shales were the soils on the floodplain that our river flowed across. All around the world today we see similar red soils. They are almost always found in tropical settings; you will see a lot of such soils in the Amazon and Congo Basins. So, now our typical Catskills outcrop has brought our mind’s eyes onto a Devonian age, tropical floodplain, watching a river flow by. But, why is this a delta?
Geologist have found that these Catskills sediments lapped up against the western Appalachian sequence. These, the rocks of New England, are the roots of an ancient mountain range. These were not the Appalachians; instead geologists call them the Acadians. It is estimated that these Acadians were, back during the Devonian, between 15,000 and 30,000 feet tall. Only the Berkshire and Taconic Mountains remain; what happened to the rest?
They eroded away.
These lofty mountains were destroyed by weathering and erosion, and their bedrock crumbled into enormous quantities of sediment. That sediment was transported by sizable rivers and it came to be deposited on something called the Catskill Delta. The delta was spread out west of the Acadians. And it is that delta, now petrified, that makes up the Catskills where the Mountain Eagle can be read.
Contact the authors at randjtitus@prodigy.net Join their facebook page “The Catskill Geologist.”