There’s probably some good weather ahead of us so let’s go for another “family day trip.” That’s when we tell you how to get to some wonderful geological location that just happens to be far enough away so that you have to spend the day getting there, seeing it, and coming back. That’s something that the two of us enjoy doing, especially when the children and grandchildren are visiting. This time let’s go to the town of Cohoes.
You have probably heard of Cohoes, but perhaps you have not visited it. The town is famed for three things: 1) the Cohoes mastodon, whose skeleton is now housed at the New York State Museum; 2) the old Harmony Mills factory, which was one of our state’s premier industrial centers back during the 19th Century; and 3) the Cohoes Falls which the Mohawk River tumbles over. As it happens those all three are very closely associated with each other. An elephant, a factory, and a waterfall? How could they have anything in common, never mind a lot? Obviously, we have a great deal of explaining to do. Today let’s hold off on the mastodon and focus on the other two.
Harmony Mills is typical of New York State industrial might, not so much today, but back in the 19th Century when the “Empire State” was almost truly imperial. You have to go there and see them to believe them. To properly describe Harmony Mills we have to use two words that we usually hate to use: the Mills are an awesome icon of 19th Century industry. Those words have come to be used far too often in modern vernacular. They should only be employed when they are truly needed; here they are. The mills were based on water power and all that water power came from just a little upstream; that’s where the falls are. In the 19th Century waterfalls were an important component of our energy needs. Where there were awesome waterfalls then there would soon be large iconic factories. Harmony Mills was an enormous textile mill complex. It was constructed in 1872; it fell into hard times and closed in 1988. Today, it has been converted into upscale lofts. 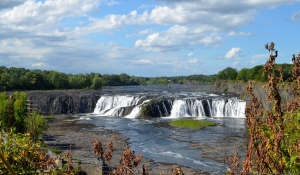 The falls were harnessed to provide the awesome amounts of energy needed, so let’s talk about them. You can visit a site that has been developed to provide the most awesome possible view of this natural icon. Find your way to North Mohawk St. and head north through town until you can turn right onto Cataract Road. There you can park, get out and walk to the viewing stand. It provides an iconic vista of the falls, which lie maybe a mile to the northwest. Why are they there?
The falls are mapped as belonging to one of the most important rock units in all of the Hudson Valley – that is the Normanskill Formation. It is a mass of dark gray sandstone and black shale. The sediments that formed these first accumulated in an awesomely deep marine basin. The Normanskill Basin was likely tens of thousands of feet deep. Sediments, mostly awesome amounts of sand, tumbled down its steep slopes as submarine landslides, and piled up at the bottom. Those sediments eventually hardened into dark gray sandstones. During the awesome stretches of time that passed in between the landslides, muds accumulated and those hardened into the black shales.
When, and just after they were deposited, these materials formed flat sheets of sediment. But, if you look at our photo, you will see that the once horizontal strata are now steeply inclined. They were deformed during one of several mountain building events that shaped the Appalachian Mountains as they are today. A geologist looks at such deformation and interprets it as evidence for ancient mountain building. Our guess is that this event was the one called the Taconic Orogeny and that it occurred during a time called the Late Ordovician, about 450 million years ago.
If we could we would climb down to the falls and take a good look at the rock types that make them up, our guess is that a lot of those strata are composed of those dark sandstones. Sandstone is mostly composed of quartz and that’s a very resistant mineral. It makes very good cliffs and even better waterfalls.
We are guessing that, a long time ago, those strata came to be tilted during that mountain building event. Many hundreds of millions of years later, the Mohawk River started cutting across the Normanskill rocks. When the river encountered those tough sandstones, it had a very difficult time cutting through them. The result was the waterfalls.