We often use lots of words without having a precise notion of what they mean. English is designed for that as sometimes its words need to have just a touch of (appropriate) vagueness. For example, just what does the word “mountain” mean? There are many good answers to that and each one is different from all of the others, and each one may still be correct. Similarly, what exactly does the word “hill” mean? It gets worse. What does “foothill” mean? Hills don’t have feet, so let’s pursue the issue and do it with a good local example.
The Catskills are often called mountains although many debate that heatedly. Our Catskill Mountains have foothills and some of those are very close to Woodstock. The foothills that we are speaking of are the hills of the Hoogeberg Range. If you have never heard the term that’s quite excusable, the Hoogebergs are not great or famous peaks. 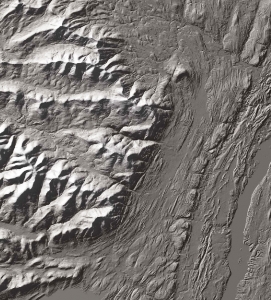 The Hoogebergs are a series of small hills lying parallel to the Catskill Front, the great eastern escarpment of the Catskills. They are found just a few miles east of the Catskills and rise to only 600 or 700 feet in elevation. That’s merely a third of the elevation of the Catskills themselves. Thus, they are adjacent and parallel to Catskills, but short. They are like a practice run before the big mountains, hence the term foothills. You can see the Hoogeberg Range if you drive north on the Kings Highway (Rt. 31), south of Saugerties and Rt. 32, north of Saugerties. The ridge looms to your left (west). It forms a fairly impressive horizon.
You can easily go and see the rock that makes up the Hoogeberg Range. There are several locations where there are gaps in these hills, and they let you drive right through the bedrock. Rte. 212 cuts through at the village of Veteran, Rte. 32 cuts through at Quarryville and the Glasco Pike cuts through at the village of Mt. Marion. In each of these locations there are fine exposures of the bedrock right along the road.
What is the Hoogeberg and why is it here? Visit the Rte. 212 exposures and you will observe some very fine, thick, rugged sandstones. These are tough rocks and they have resisted the efforts of weathering and erosion. To the east and west, softer rocks have eroded away, and as they did the Hoogeberg came to be sculpted into a series of hills. These sandstones belong to a geological unit called the Mt. Marion Formation. It is mostly this sandstone and it makes up the Hoogeberg Range. Park along Rte. 212 here and poke around for a bit and look the sandstones over. You may find the fossils of some marine shellfish. That tells us a lot. The Mt. Marion sands accumulated at the bottom of an ocean, sometimes called the Hamilton Sea. The sands once made up the floor of that sea.

At the Glasco Pike exposure you will learn more about the Mt. Marion and the Hoogeberg. This outcropping is at the bridge which crosses Plattekill Creek. The lower levels of the exposure are mostly black shale. Up above, however, those sandstones make their appearance. We talked about this in an earlier column. This sequence of strata records a transition from an offshore, deep water setting to a nearshore, shallow ecology. The offshore accumulated muds that hardened into the shales while coastal sands would eventually harden into the Mt. Marion sandstones.
If you look carefully you may notice that the strata at these locations are not perfectly horizontal; they dip gently to the west. These rocks were all here during the late Devonian time period and they were involved in crustal tilting that was part of a mountain building process, then going on in New England. The tilting of these resistant strata raised those sandstones and exposed them to erosion. They responded by eroding into the hills we see today. The tilting accounts for much of the form of the Hoogeberg. Its west-facing side is generally a gentle slope, reflecting the original tilting, while the east-facing front was eroded into a steep slope, often a cliff.
Crustal tilting, shallowing seas, ancient shellfish, there’s a lot of history in these pretty little foothills and they do make up a significant feature in our local landscape, even if they are just foothills.