Halfway measures
On the Rocks
Feb 13, 1997
Updated by Robert and Johanna Titus

We usually think of mountains as emblems of permanence. “Old as the hills” is certainly a common enough old chestnut. It implies that the hills (and mountains) are just going to be there forever and ever.

That may not be. George Halcott Chadwick found it otherwise. Chadwick was one of the great Catskill-area geologists of the first half of the 20th Century. He spent a lot of time looking at regional maps and he gradually came to the conclusion that the eastern Catskills are, quite literally, not all there. Take a look at a good regional map. Kaaterskill and Plattekill Cloves divide the Catskill Front into three east-west ranges: the Jewett Range in the north, the Roundtop-High Peak range in the center, and the Sugarloaf to Plattekill Mountain range in the south. Each of these three ranges is sharply terminated on the east by the steep, straight slopes. It’s as if something had chopped off those eastern parts. The three eastern slopes are called “truncated spurs” and together, they define the “Wall of Manitou” of the Catskill escarpment. The “Wall” is a straight, ten-mile long front. Chadwick found that to be remarkable; he thought that the truncated spurs and the steep, straight nature of the wall required some unusual erosional processes to explain them. He believed that it was glaciers which did the job. 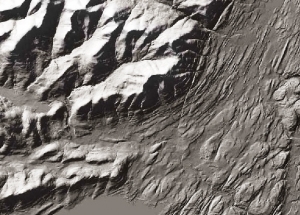 The story begins a bit more than 100,000 years ago when there was an event called the Illinoian glaciation. A massive glacier, advancing from the north, seems to have descended the Hudson Valley and gradually filled it. Picture a stream of ice, at least to the brim of the valley and probably a lot higher. In many ways it behaved like a river, the ice slowly flowed down the valley. Now some sort of a Catskill Front had already existed, but it probably wasn’t the steep straight wall that we know today. More likely, gentle slopes descended gradually, well east of today’s wall. In fact, Chadwick thought the slopes may have reached out one or two miles into the Hudson Valley. That included Overlook Mountain which would have been, Chadwick thought, about twice its present size.
The passage of the ice had an erosive effect upon the old slope. Moving glaciers pluck and grind away at landscape’s bedrock. The ice likes to carve a steep-walled trough and that’s what the Illinoian glacier set about doing. The lower slopes of the Catskill Front were largely composed of soft shales and these eroded easily. The upper slopes were of resistant sandstones and these put up much more of a fight. Given time, the steep slopes of the Wall of Manitou were the result. But not before quite a bit of Overlook (and the rest of the Catskill Front) was worn away.
With the return of warmer climates, the Illinoian glaciers eventually melted but the respite was brief. About 25,000 years ago the climate deteriorated again and once more a stream of ice flowed down the Hudson Valley. This has been called the Wisconsin glaciation. The whole process was repeated and again the Wall of Manitou suffered even more erosion. 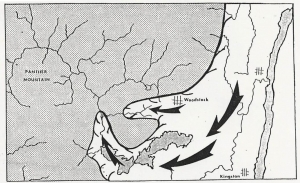 This had a real effect upon Overlook. We described the final stages in the process in a Times article last August (1996). The steep ledges up there date back to those last moments of glaciation. In the end, after the Wisconsin glaciers retreated, Overlook Mountain was literally half the mountain it used to be. Fully two miles of eastern Overlook were gone. It’s quite a thought, half a mountain lost. That is, if Chadwick was right.
George Chadwick’s story is a fine one and we are very fond of it. We hope that it is true, but the hypotheses of science are not always so simple. Sadly, there are modern geologists who very much doubt that this is what happened. They just do not think that passing ice is capable of removing so much rock. One of the problems with their objections, however, is that they don’t have any better ideas. So–is Overlook a whole mountain or is it half a mountain? That is the question.
==================================================================== Contact the authors at randjtitus@prodigy.net. Join their facebook page “The Catskill Geologist.”