Raindrops
On the Rocks
The Woodstock Times
Mar. 20, 1997
Updated by Robert and Johanna Titus

We encounter many natural wonders in this field of geology and too often we take them for granted. There are so many things preserved in the rocks that really should not exist. Dinosaur footprints are good examples. How could something as ephemeral as a footprint in the mud be preserved 100 or 200 million years after they formed? The answer is that they really shouldn’t; it’s a one in a million chance. But what if there were ten million dinosaur footprints? Then ten of them would be preserved. If there had been a hundred million dinosaur footprints, then a hundred of them should still be around. One in a million shots become certainties if you just play the odds.
And geologists must learn to play the odds. Pretty much all of the fossils we find were originally one in a million shots. They were bones or shells or tree trunks that defied the odds, got buried, hardened into rocks and were found. And then, when you have a million fossils, one of them is truly a grand discovery: a complete dinosaur skeleton, a mastodon frozen in the tundra, a little frog in a piece of amber and so on. Search for fossils long enough and you beat the odds.
We are used to this, but there are still things that we have a hard time believing, even if we see them ourselves. One of those odds-defying oddities can be found right here in the Catskills. They actually aren’t fossils, but the word fossil can be used to describe them. They are raindrop prints, often called “fossil” raindrop prints. 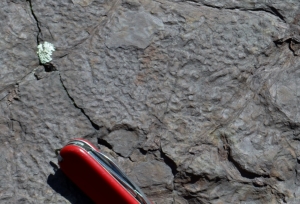 What could possibly be more ephemeral than a raindrop print? The drop falls out of the sky and leaves an impact crater in the soft earth. The crater is just that, a soft rim of earth thrown up by the impact. So far, so good, but how can something like this come to be preserved? Isn’t it likely that the very next drop will destroy the crater left by the last one? The answer is yes, of course, and the next 100 or 1,000 drops will also destroy any craters left about. And after the storm, won’t the earth be too soft to preserve an impact crater? Of course it will, the ground should be all mud, too soupy to preserve any such features. And even if a raindrop print were to survive, wouldn’t wind eventually blow it away, wouldn’t animals step upon it, wouldn’t plants grow through it? Wouldn’t this and wouldn’t that! The answer is yes, yes, yes, the raindrop should be destroyed.
And yet, there they are, . . . preserved in rock . . . little, bitty structures that look exactly like . . . raindrop prints! So, how did they get there? The prints are found on the surfaces of beds of red shales which are thought to have once been soil surfaces. That’s a helpful hypothesis and it adds some plausibility to the story. But, shouldn’t the prints be lost in a mush of mud? To avoid that you have to imagine a very brief shower. A few drops sprinkle the landscape and then the “storm” is over, hardly before it had begun. But what about preservation? Next you have to let the soils dry out. This doesn’t turn it into rock, but dry soil is stiff enough to resist distortion. Finally, you want a flood to occur and submerge the flood plain. Floods are often not as catastrophic as the evening news coverage would suggest. Flood waters can often rise rather passively and bring blankets of new mud to bury the old soils. That can be done without much disruption of the rain drop prints. Continue this process for a very long time, bury the prints in a deepening thickness of sediment, and it will harden into rock. With that the raindrop prints are preserved. It’s a long shot, a very unlikely sequence of events, but it is possible, and it does happen. And that’s how it is that we can go and find such remarkably unlikely features in the rocks.
Such things are called primary structures. They are rather fun to watch for and they tell us so much about what the rocks represent. We would like to tell you where to go and find some raindrop prints, but that is hard to do. Look for red shales and these are common throughout the Catskills. Then pick through the shards of shale. If you are lucky you may find some. If you are not lucky, well maybe next time.
=================================================================
Contact the authors at randjtitus@prodigy,net. Join their facebook page “The Catskill Geologist.”