We have been members of the Mountaintop Arboretum at Onteora Park in Tannersville pretty much since it was formed about 20 years ago. We have lost track of how many times we have made presentations there. But we are speaking at the Arboretum once again this Saturday, June 23, 2018 at 10:00 AM. We will be giving a PowerPoint presentation about the ice age and bedrock history of the Arboretum grounds. Then we will be taking our audience outside to do a geology walk across a good part of Arboretum property. It will be an easy walk across a relatively flat landscape. Try to come along, if you can fit it in to your schedule.

You may not be able to attend so we thought we would put together a bit of a quick guide for some time when you will be able to get out there. The main part of the Arboretum grounds are called the West Meadow and that is in the northwest corner of the property. Scattered across the West Meadow are the trees that make up the bulk of the Arboretum. You can visit and wander the trails that are there. You can look at the various species of trees which are all well labeled. There is even some art in the form of stone sculptures. 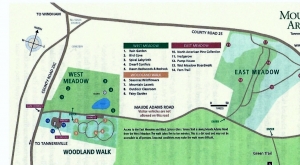 But, of course, when we are there, we see the geology, a lot of geology. We will be speaking about it all on Saturday, but let’s focus on the West Meadow today. To get there you travel north on Rte. 23C north from Tannersville until you reach the Arboretum. You can park on Maude Adams Lane and then walk back to the gate to the West Meadow. When we are there, we look across the grounds. What we see is a landscape that shows the effects of glaciation. We see what might be called an ice-scoured plain. That is, we see a glacier sweeping down from the North and overrunning the grounds of the Arboretum.

The most obvious manifestation of that is the exposed bedrock, right there at the gate. The bedrock, here, has been scoured by the passing ice. It has a smoothed and polished look to it. Wander around and look it over. You will, we think, be able to see the polish. Also, look for long straight scratches in the surface. They have a north to south compass orientation. These are glacial striations. If you have been a regular reader then you have seen these before. They were made as the glacier dragged cobbles and boulders across the surface. These are faint impressions and we couldn’t get a good photo, but you should be able to find them without much trouble. 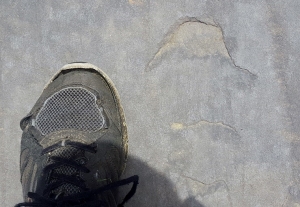 Next, watch for crescent shaped fractures in the rock surface. These are called chattermarks, they were formed when a boulder was dragged across this same surface. The weight of the ice pressed down, but the push of the glacier pushed it forward. When the push overcame the weight, the boulder “leaped” forward and “landed” leaving the crescent. Over time a series of crescents was formed.

Next, look around and you will soon see a large boulder. That’s something called a glacial erratic. That’s a boulder that was swept up and carried along by the advancing glacier. The boulder reached Arboretum grounds when the climate warmed and the glacier melted away. The boulder has been sitting here ever since the end of the Ice Age. 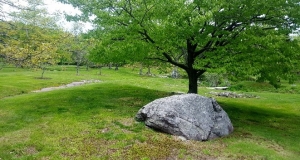 Now you know enough to be able to wander the grounds of the West Meadow. We are sure you will enjoy seeing all the trees that are there. After all, that is why the Arboretum was established. But now you will be able to understand and appreciate that this is an ice scoured plain. Watch for other ice scoured outcroppings; there is a very good on in the southeast corner of the meadow. You will see other glacial erratics as sell; they are scattered about all across Arboretum property. We hope you will just plain understand this landscape better.