This is a new installment of a series on the geology of Plattekill Clove, all written at the little red cabin owned by the Catskill Center for Conservation and Development. One of the great pleasures of staying at the cabin is walking, after full darkness, downhill to the bend in the road and gazing out onto the Hudson Valley. You can only see part of the valley from there, but it is a grand view. The most striking feature is the Kingston Bridge, all lit up and shining in the surrounding darkness. This is Thomas Edison’s breaking of four and one half billion years of nighttime black. Still, Nature had always had her own lightshows. The best part of the evening stroll is, on those occasional nights, when you can turn around and look west, and see the flashes of lightning from an approaching Catskills thunderstorm. If they are in season, the walk back is lit by the lightning bugs serenaded by crickets, and that can be positively intoxicating.

But daytime is when you are most active around the cabin. There are things that can only be seen then. The most rugged part of Plattekill Clove is found at its very top. That’s a complex stretch of canyons called the Devil’s Kitchen. It is a striking feature, easily viewed from the old stone bridge on the highway at the very top of the canyon. You crane your neck and look down what seems, and is, a precipitous drop.

A small stream descending down the mountain from the north has, over the eons, carved this . . . what to call it . . . not a canyon, not a ravine, perhaps just a jagged cut, no a jagged slash in the rock. The walls on both sides are shear vertical cliffs. They are so flat as to almost be shiny. None of this is accidental; the walls of rock that you are seeing are called joint planes.Hundreds of millions of years ago, great tectonic collisions had squeezed these rocks. Later, when the compression was ended and the rocks relaxed, they expanded and became brittle. That’s when they snapped and those perfectly flat and perfectly vertical fissures appeared. You need to pause and really look at them in order to truly appreciate their form, and their beauty. 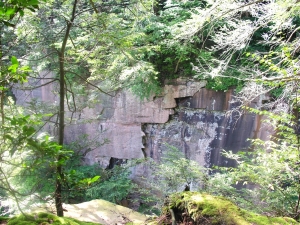 After forming, so long ago, these joints sat in stillness for almost all of those hundreds of millions of years as the physical laws of inertia prevailed. Silent and unmoving they did absolutely nothing. But, that would change, especially with the coming of the Ice Age. That’s when they began to be affected by the harsh vicissitudes of glacial climates. Water seeped into these joints, it expanded, as it turned into ice in the freezing cold, and that resulted in further cracking. The expanding ice widened the fissures and they became broader and more prominent. That let still more water enter and chemical weathering followed. Nature was working on the old joints. She had become an artist, a sculptor in order to create something aesthetic from them.

Now the Ice Age ended. The climate warmed up but the winters would still be frigid and ice would perform its engineering at that time of the year, but something new would assist. Nature enlisted a new ally. That stream we spoke of earlier, made its appearance. Streams are also sculptors and good ones. This one descended the mountain and reached the Devil’s Kitchen. There it speeded up the sculpting process. During peak flows, the rivulet becomes a torrent and a powerful one. It can dislodge blocks of rock, sometime very large ones, and haul them off. Slowly, the Devil’s Kitchen took on its present form. One by one, great chunks of rock were knocked loose and carried away. Slowly that slash in the mountain became the steep, jagged and picturesque thing of natural beauty that it is today.

The old artists of the Hudson Valley School of art would have preferred the word sublime over picturesque and they would have had a point. The scene here is sublime in the sense that it portrays nature not as parkland, but as a rugged, certainly wild and even violent entity. We come here stand and we gaze at Devil’s Kitchen and we are overwhelmed by it; we should be. Contact the authors at randjtitus@prodigy.net.

Read their blogs at “thecatskillgeologist.com.”