The Round Pyramid of Cairo

Once you begin to notice it, Cairo Round Top is a mountain you can see from all sorts of places within the Hudson Valley. It can be seen from the north and south and from above and below. It’s aptly named and rather picturesque for its smooth rounded profile, but the question that emerges is how did it get there. 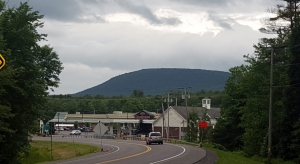 Round Top rises above Cairo

Any geologist, working in this region, would immediately guess that glaciers had something to do with it. And that’s exactly the case with Round Top. The proof comes with a careful look at its upper slopes. Most of Round Top is posted land, but there are several roads that circumnavigate the hill. On Heart’s Content Road, southwest of the hill, you can get a good look at Round Top. Up toward the top there is a great ledge of rock. It’s typical Catskill sandstone. Long ago, nearly 400 million years long ago, that sandstone made up the channel of an ancient river. The quartz sands of that river have hardened into rock. Quartz sandstone is among nature’s hardest and most durable rocks. Hence the cliff, but there’s more than that.

About 22 thousand years ago a very sizable glacier was advancing down the Hudson Valley. It filled the valley right up to the top of the Catskill Front. Indeed, it overflowed into the Catskills themselves. That, however, is another story. The important point here is that much of the time the ice overrode Round Top, the hill is only a little more than 1,400 feet tall and was not much of an obstacle to the flow of the ice. The glacier simply flowed across it.

Glaciers have a very predictable effect upon mountains that dare to get in their way. They tend to streamline the upstream side of the hill. That accounts for the smoothly rounded form of most of Round Top. The other thing that a glacier does is a little more difficult to explain. The downstream side of the impeding hill comes to be sculpted into a steep downstream-facing slope, often a cliff. The process is called “plucking.” The ice apparently adheres to the rock and yanks loose large chunks of it and drags it off. Over time a cliff results, a scar of the plucking process. That is the explanation for that sizable ledge at the top of the south side of Round Top.

Okay, so far, so good, it sounds like we have explained Round Top, but we haven’t. We understand the shape of Round Top but what is it doing there? Our curiosity is about why the mountain exists there at all. You see, the Hudson Valley glacier advanced down the valley at least from 25,000 to 14,000 years ago and that is a lot of time. It also passed down the Hudson Valley about 120,000 years ago during an event often called the Illinoisan glaciation. The passing ice plucked the Catskill Front as well as round Top and over time it sculpted the Wall of Manitou as the Catskill escarpment is sometimes called.

And that is our problem. How come Round Top didn’t get scoured away entirely during all of this glaciation? We don’t know and that bothers us.