A fun part of our job with the Columbia-Greene Newspaper chain is just going out and exploring for some fascinating locations where there is good geology. Recently we were in Saugerties to hear a lecture at the Friends of Saugerties History Group at the town library. Afterwards, we just went exploring. We found ourselves heading south on Partition Street, we crossed the bridge over Esopus Creek, and took the first left onto East Bridge Street. That took us along the Esopus on Ferry Street.

We didn’t expect to see much. You see Esopus Creek, long ago, when it began flowing into the Hudson, formed a pair of peninsulas that pushed out into the larger river. We expected that these would be composed mostly of sand and would be pretty boring stuff. Well, we were wrong.

A little less than a quarter mile down the road we were forced up and over a sizable knob of rock. When they constructed Ferry Street they had to blast through all that rock. And that gave us a beautiful exposure of bedrock. 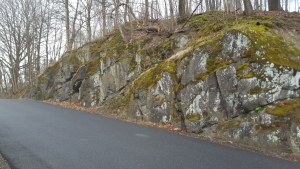 We recognized the rock unit, immediately. It was the Normanskill Formation. That has some very important and very interesting geology. It dates back about 450 million years and it is big. Much of the middle Hudson Valley is blanketed with the Normanskill. A lot of it is west of the river, but there is more of it on the east side. It’s named after Normanskill Creek where a very large exposure is found. That‘s where Rte. 9W approaches Rte. 787.

It’s a unit that we should be writing about more often. It is composed of a mixture of thick dark gray sandstones and thinly laminated black shales. Way back during the Ordovician that sandstone was sand and the shale was mud. These sediments accumulated at the bottom of what is sometimes called marine trench or an “oceanic deep.” Deep indeed; that’s a stretch of ocean that can be 20,000 feet deep or more. The best known modern deep is the Marianas Trench in the western Pacific. It is more than 35,000 feet deep! Well, you can easily imagine those rocks caught our attention. They took us down to the deepest parts of the sea—to the very abyss.

But there is more—a lot more. Those black shales speak to us of routine moments on the floor of such deeps. They accumulated one lamination at a time. Silt and clay slowly settled to the floor of the ocean. It takes grains of silt and clay months, even years, to sink that far. So these sediments accumulated very slowly. A few inches of this sort of black shale may represent enormous amounts of time. How much time does a foot of shale represent? Well, in truth, we geologists have no idea, but it is a lot of time.

Not so with those sandstones. They are different. They are a special type of sandstone; they are called greywackes. A greywacke is not just a sandstone; it is a “dirty” sandstone. You are probably used to the clean white sands that we see along the Atlantic coast; those are almost pure quartz sands and quartz is almost white.
But these greywackes are different; there is a lot of quartz in them but they also have a large amounts of silt and clay. That’s the dirt in a “dirty” sandstone.

Greywackes are remarkable for how they form. They are often the products of submarine avalanches. Typically an earthquake strikes the deep sea floor and masses of sediment are thrown up into suspension. Such masses of sediment then, slowly at first, begin to flow down the slopes of the deep. Those avalanches are called turbidity currents and they quickly pick up speed. Soon they are thundering down the steep slopes into the abyss. Eventually they reach the bottom and begin to slow down. When they slow down enough, all that dirty sand slows to a halt and deposition occurs. Hence the greywackes we saw—and probably each one of them.

All this gets us back to the Ferry Street outcrop. It has an eye-catching feature; there are six thick horizons of greywacke and, in between them, are those expected black shales. But the shales are thin, only inches thick. That conjures up quite an image.

We walked along this outcrop and counted those six thick greywackes; we realized that we were likely counting earthquakes. And those thin shales indicated to us that those earthquakes and those turbidity currents had come in relatively short intervals. Those earthquakes were occurring in the nearby rising mountains of New England. Those mountains were in full uplift mode and we saw the results—in Saugerties.