Bugs in the house

We don’t know how it is where you are, but in Freehold we have had one amazing summer for centipedes. They are all over the place! We find lots of them on the undersides of logs we have been using for firewood. We have also seen them scurrying around all over our property. Unfortunately that includes even inside our house where the little creatures have been making some occasional appearances. One of us, Johanna the biologist, has been controlling her professional enthusiasm very well! We wonder what causes such a biological event. 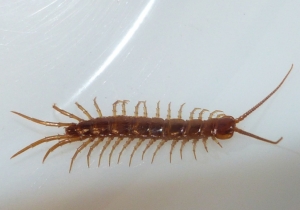 So, why are centipedes the topic of a geology column? The answer is that they are part of our Catskills geological history. We have written about our Devonian past in this column a number of times. About 375 million years ago a great delta spread out across that which would become New York State and, growing upon it, was something called the Gilboa Forest. That was a great expanse of tropical jungle. Our Catskills are essentially a petrified delta and these mountains possess the fossil remains of the plants and animals that lived on it. This is the oldest well preserved fossil forest ecology known to science so it is important. Paleontologists long ago learned a great deal about the plants of this jungle, but there were real limits on how much we knew about the animals that had lived in this ecology. There should have been a lot of animals living in the Gilboa Forest but they, for the most part, refused to be found.

Then, a quarter century ago, geologists at SUNY Binghamton found a way to dissolve Catskill sandstone so that the rock disappeared and the remains of tiny creatures that had been in them were separated out.  Hydrofluoric acid does a good job of dissolving the silica of rock, but it leaves the cuticle of arthropods alone. Using this technique, those Binghamton paleontologists quickly discovered bits and pieces of the skeletons of numerous arthropods, including quite a few centipedes. This was important research. Now geologists could start to put together lists of the animals that had inhabited this ancient forest. We were getting our first look at early forest ecology.

That list proved to be pretty much what people had expected. Our Devonian forest was populated by relatively primitive animals, and most of them were arthropods. There were very primitive insects and then a fair number of creatures which would be familiar to you: mostly spiders, millipedes and centipedes.

The point we are driving at is that those centipedes, which have been plaguing us this summer, have been around here for a very long time. And they have evolved, but not so much that you would notice it. We like to say that these creatures are “ambassadors from the Devonian.” When we look at them, we feel that we are looking into the past. If we were ever lucky enough to find a fossil centipede we would be thrilled beyond imagining. But, there they are – not fossils made of rock, but real living, breathing centipedes. To people like us this is a bit of a thrill.

Modern centipedes have to live in moist surface layers of soil because their skeletons lack a waxy coating which would keep water inside them. They have always been like this and, back in the Devonian, they inhabited the duff, or the moist humus-rich surface soils. They all have mean looking pincers, located at the most forward portion of their bodies. These pincers are not just mean looking; they are venomous too. These are used to kill and these little creatures are carnivores. They are the saber tooth tigers of the soils. Nobody is exactly sure what they eat as they are only active at night, but small worms are likely candidates for their meals. The largest fossils of these killers were over three feet long, a very frightening notion. We are not sure if any of our local centipedes are powerful enough to penetrate human skin, but we have made no effort to test that hypothesis, and we hope that you won’t either. Some have been reported to harm humans with their bites, especially small children, so we wouldn’t temp fate with any you see. But do take a good look, maybe with a magnifying glass. You are looking into the Devonian. Contact the authors at randjtitus@prodigy.com. Join their facebook page “The Catskill Geologist.” Read their blogs at “thecatskillgeologist.com.”