Our reader’s rocks: Folds along the highway.

Dear Professors Titus: While driving along the New York State Thruway, from Kingston to Leeds, I noticed that the strata are aligned roughly north to south; they are seem inclined either to the west or to the east. Does this have anything to do with the region’s plate tectonic history? Alan Thompson

Dear Mr. Thompson: Over and over again, in this column, we ask readers to take notice of the geology that they pass by every day. So, we should be just a little embarrassed that you have brought our attention to rocks that we have not paid much rattention to. We have passed by these many times, but took little note of them. Thanks for your question; you have done us a favor.

The first chance we got, we drove that length of the New York State Thruway and paid a lot of attention to the stratified rocks that we passed by. Johanna drove and Robert took notes. We soon had to agree that the rocks were oriented north to south along the road and they dipped mostly either to the west or the east. We resolved to be real scientists and collect “data.” Whenever we passed an outcrop we determined whether or not it was dipping west or east.  The highway is posted with milestones so we were able to record which way the rocks were dipping and at which mile. That sounds like real scientific data collection, doesn’t it?

Well, we were able to pick up on patterns. That’s an important step in science. You want to give Nature a chance to show you patterns and then you want to figure out what they represent. Nature frequently “wants” you to notice things and decipher them. We were eager to try. Our focus was between miles 70 and 114. We found about two dozen outcroppings. Twelve of them dipped to the west while another 14 dipped to the east.  So, there was something close to an even split between the east and west dipping strata. We did find several other outcrops where the rocks were flat or where we could not decide which way they dipped; it’s hard to do fieldwork at 65 miles per hour!

Well, we had, indeed, found a pattern and the next step was to come up with a good hypothesis to explain it. What could have folded the rocks equally to the east and west? Explaining that might seem hard to do, but sometimes you can draw upon what you know and come up with a good idea quickly. To us there was a very plausible explanation. All of the strata we had been looking at were early and middle Devonian in age; that is they dated back from 415 to about 380 million years in age. Geologists have determined that these rocks were caught up in a very large mountain building event, called the Acadian Orogeny. That, back during the Devonian, lifted most all of New England into a great mountain range. It’s certainly the event that created all the folding that we had seen.

What happened, in short, is that something most people would call Europe had drifted westward and collided with our North America. Try to imagine what all that involves. Two continents, enduring a collision, would experience a lot of compression. Stratified rocks, caught in between, would be squeezed. The result is something that we sometimes call “accordioning” of the rocks. The once flat lying strata were folded into up and downs that might remind you of the folds of an accordion. Those “ups” are called anticlines while the “downs” are called synclines.

All those early and middle Devonian strata are the ones caught up in all of this. They were folded. You can simulate this by taking a stiff magazine and compressing it. The magazine will crumple up into exactly these sorts of folds. 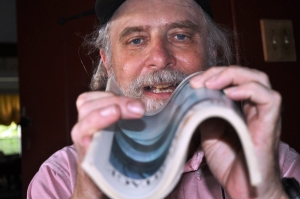 Your folded magazine quite exactly simulates what happened in the Hudson Valley along the thruway. When they constructed the highway they didn’t know it, but they were cutting through an extensive fold belt. The continental collision had produced any number of westward dipping rocks and an equal number of eastward dipping strata. That’s what you see as you drive from Kingston to Leeds.

You have to keep this in mind the next time you are doing this drive. Take notice of the folded rocks and appreciate what all this represents. The highway is cutting through the bowels of an ancient mountain range. All these rocks were once buried under thousands of feet of mountain range. This certainly gives you a different image of what you see along the highway, doesn’t it? Contact the authors at randjtitus@prodigy.net