Like most geologists we spend a lot of time looking at U.S. Geological Survey topographic maps. The whole country has been mapped and most any camping goods store will stock the maps for its own area. They are a wealth of geography; blue lines define streams, black lines are roads, green is for forests and the little black squares are homes. We find ourselves happily poring over all of these symbols, but most of all we like the sinuous brown contour lines which define our regional landscapes. Closely spaced contours define steep slopes and cliffs, while widely spaced lines indicate flat areas, so we can literally “read” the hills and valleys. We geologists consider this sort of thing to be fun, but there is a serious side to our interest. Topographic maps often tell us where to go look for interesting geological mysteries.

And so it was, about 35 years ago, that the late Dr. Yngvar Isachsen, of the New York State Museum, found his attention drawn to Panther Mountain. The mountain has a distinctly circular shape. Those are Esopus and Woodland Valley Creeks. That’s best displayed by the two streams that nearly encircle the peak. It’s an eye-catching pattern which shows up even better on satellite photos of the Catskills. It’s a big, beautiful, nearly perfect circle about six miles in diameter, and there’s nothing quite like it anywhere else around here. 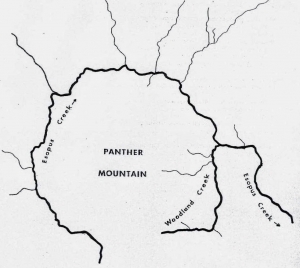 Such observations are commonplace in science; Nature presents us with strange patterns that cry out for explanation. The scientist picks up the scent and goes on the chase. But from the beginning there was nothing commonplace about the Panther Mountain circle. What could have produced it? Probably one of the first ideas which would cross a person’s mind is an asteroid impact, but such things are too good to be true. Discoveries that exciting come rarely in a career, and a good scientist controls his emotions and looks for other, more mundane explanations. It never hurts to be careful about things like this.

And, for Isachsen, there were some very unexciting alternative explanations. There might have been a large mass of salt beneath Panther Mountain. Salt is buoyant and might have lifted the mountain enough to cause the circle. We find such domes of salt in western New York, but there are no salt-bearing deposits this far east. Then maybe there was a great mass of granite beneath the Panther Mountain. This too might have buoyed the mountain up a bit, but gravity studies ruled that out.

Sometimes the wildest ideas that you can think of gradually start to look better and better. As Sherlock Holmes said, “If you eliminate the impossible, all that remains must be true.” Thus the asteroid hypothesis kept looking better, and there were ways to test the outlandish hypothesis. If Panther Mountain did indeed have an asteroid crater beneath it there must be a horizon of shattered rock down there. That loose rock would cause something called a gravity anomaly, things would actually weigh just a little bit less at Panther Mountain than they should. And in fact there was a gravity anomaly, especially on the north side of the Mountain. That suggested that an asteroid had approached from the south and plummeted into the future Catskills vicinity. After the impact the sediments that now make up the bedrock of the Catskills slowly buried the crater. But as those sediments draped across the rigid rim of the old crater, fractures formed and that softened the rock enough so that Esopus and Woodland Valley creeks could selectively carve their valleys into the ring shape we now see. So Panther Mountain is not a crater, it’s just shaped like the crater buried beneath it.

There are a number of obvious questions. First, just how big was this asteroid? That’s hard to say and nobody knows for sure, but a half a mile across seems reasonable. When did the impact occur? That’s an easy one. The impact lies within the Catskill sedimentary sequence which means the asteroid plummeted into the Catskill Delta a little less than 400 million years ago.

The biggest question is has all this been proved? Well, not exactly. A nice circumstantial case has been made that is very consistent with the asteroid hypothesis. But we scientists are cautious folk, and more work needs be done. Nevertheless it is a marvelous example of the kinds of truly exciting discoveries scientists make, and make routinely. What could be more drab, at first glance, than bedrock, those dull, inert, brown and gray masses of mineral material? And yet what could be more exciting than to find that an asteroid once landed in your very own backyard, a discovery only preserved in those “dull” rocks. We live in a culture rich in the pseudo-sciences, but the real science of rocks can be far more fascinating than any of them. It gives you a different perspective on rocks, doesn’t it?