Slides at the Vanderbilt Mansion?

We have been writing about the landslide threats that face the Hudson Valley, however our focus has been on the Albany area where so many of our readers reside. But landslides can occur up and down the entire Hudson Valley. They are common wherever we find the sediments of Glacial Lake Albany, an ice age lake that filled the whole Valley from the New York City vicinity to well north of Saratoga Springs. Today, let’s travel down the valley to the town of Hyde Park where there is more to be learned about our valley’s landslide dangers.

You have likely been to Hyde Park. We have written about this location several times; it’s a town built upon an ice age delta. There is a stream there, Crum Elbow Creek, which once flowed into Lake Albany. It carried sand and silt into the lake and deposited it as the Hyde Park Delta. Hyde Park is renowned as the birthplace and home of Franklin Delano Roosevelt. His family home, Springwood, shows features of past landslides, but today let’s focus on another national landmark and its glacial features.

That would be the Vanderbilt mansion “Hyde Park.” It is an enormous, even massive, mansion lying above the Hudson. If you visit the site, you should first tour the mansion; it is well worth the effort. Then you will want to do some hiking. This was a huge estate and there is much to see. Head south from the mansion and you will find the formal gardens. They are still well cared for and likely look much as they did when the Vanderbilt’s last saw them. Then turn around and hike north of the mansion. Soon you will find one of the finest views of the Hudson Valley that you can see anywhere.

South or north, it doesn’t matter; you will see the same things. To your east you will observe a broad flat land surface, that’s the one that the Vanderbilt’s built their home on. Most of the rest of the estate was spread out across this surface; it’s dotted with a fine arboretum of ornamental trees. But, what we saw was the top of the Hyde Park Delta. The flat top of a delta is called the delta topset. Now, after taking in the beauty of this topset, turn around and see the sudden drop-off, just to the west. It’s a steep slope which forms the edge or border of the delta. This steep slope is typical of a delta and the feature is called a delta foreset. 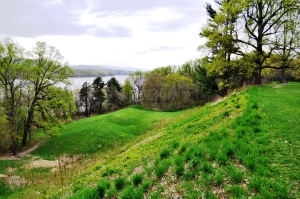 We have mentioned the term delta foreset several times in this series of columns. Foreset slopes are very prone to rotational landslides, just the sort that have been so common in the Hudson Valley. At the Vanderbilt Mansion we think the evidence allows us to see the results of such landslides. Let’s do those hikes all over again and see what we can see.

Let’s head south again from the Mansion. You will be following a nice dirt path. We see the same things again; to our left is the delta topset; to our right is the foreset. But, this time, the foreset is forested. Now we have to use our newly trained eyes. These past two weeks we have learned about how rotational landslides leave hemispherical scoops in the tops of steep slopes. Take a look at our photo. You will see one of these “scoops.” See the broad curve to the top of the slope. We think that what we are looking at is the scar left by and ancient rotational slide. See the abrupt drop-off? We think that this is what we have called the “headwall” of a rotational slide. Do you remember the photo of the slide at the Sons and Daughters of Italy from a week ago? Compare the two; a week ago the image was of a recent slide; the one you see today is from the ancient past. 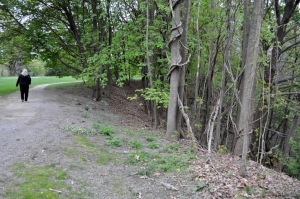 How ancient? We don’t know and wish that we did. Did rotational slides occur only in the distant past, perhaps just after Glacial Lake Albany drained? Or are they events that have been happening throughout the 15,000 years that have passed since the lake disappeared? Again, we don’t know; there seems to be no way to tell.

If these are ongoing events, then that is troubling; it means that they continue to be a threat and that someday, the Vanderbilt Mansion may be caught up in a rotational slide. That is indeed troubling, but perhaps it is something we should be aware of.

Contact the authors at randjtitus@prodigy.net. Join their facebook page “The Catskill Geologist” Watch for their new article in the winter online issue of Kaatskill Life magazine.