The Valley of the Kings

It is a special vicinity, the eastern side of the Hudson Valley. It became a fabled land of America’s 19th century gentry. This has a culture of its own: an American aristocracy made up of the Montgomerys, Roosevelts, Delanos, and even the upstart Asters and Vanderbilts There were others, but mostly, it is the land of Livingstons. It was all these whose lives were lightly fictionalized by Edith Wharton. But, to many, this is also the land of Andrew Jackson Downing, Alexander Jackson Davis and Calvert Vaux. They were the founders of American landscape architecture and they made the valley what it became. Here they created landscape motifs that spread across all of America.

And what a landscape they had to work with and what wonderful sceneries they created. Many of their grand old mansions are hidden along the forested banks of the great river. But a number are now open to the public. You can visit and experience effects that were planned by these great architects. There weren’t just driveways; there were great sweeping circular drives, generally leading up to imposing porte cocheres or colonnaded facades.

There weren’t just grounds planted with grass. These were landscapes where each tree and shrub was selected for its effect. Commonly, each was planned, planted and carefully tended to make it an integral part of a grand landscape plan. These farsighted architects thought to the future and the future is now. The old trees have grown into the majesty of old age. Their aged limbs often hang down, draping manicured lawns below.  Sadly, these architects could never hope to live long enough to experience the full results of their labors. 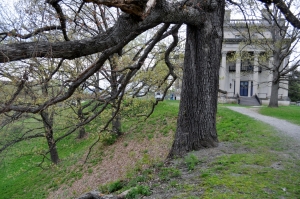 Trees at the Vanderbilt Mansion at Hyde Park

Scenic views would be assured, but more was required to achieve a splendid perfection. Trees were left uncut or actually grown in order to frame some particularly desired view. Driveways and footpaths were deliberately routed in order to lead the visitor to some special vantage point. Even the homes themselves might be coyly veiled in forest until the drive rounded some special bend. Ponds were created in just the right place for just the right effect. And there were the gardens.

And then there were the “planned views.” The inhabitants of these wonderful homes would be able to enjoy vistas that were actually carefully integrated into grand plans. The Hudson Valley provided most of the raw material for that. This broad and serene river had cut handsome steep banks into its shores. Picturesque ravines descended to the riverbanks. Beyond were the Catskill Mountains whose imposing front, the “Wall of Manitou,” kept changing color with the time of the day and season of the year.

But more than anything else it was the abundance of beautiful flat riverside platforms that made the landscape. Nature seems to have chosen the eastern bank as the ideal setting for a special land. But why? It all has to do with the geology. A mere 14,000 years ago this verdant and green stretch of valley was a land of melting glaciers, it was the ice age carved the Catskill Front and also made the east bank of the lower Hudson.

I have written about Glacial Lake Albany before. It drowned much of the eastern bank of the Hudson in Rennselaer, Columbia and Dutchess Counties. The lake was elevated high above today’s Hudson and so too was its lake bottom. Lake floors come to be blanketed by thick sequences of monotonously flat mud. Our lake bottom emerged as the ice melted away and its waters drained into the Atlantic. That left a flat platform towering high above the eastern Hudson. It offered splendid vistas of the river and they attracted the wealthy. Visit Montgomery Place, Wilderstein, Springwood or the Vanderbilt mansion and appreciate the views and the landscape architecture. Please notice that which is flat. It’s all of it a gift of the ice age. 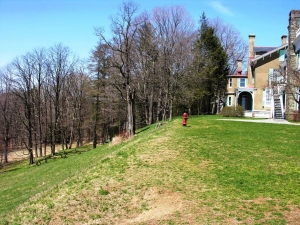 Reach the author at titusr@hartwick.edu. Join the Titus facebook page “The Catskill Geologist”