Like many readers of the Columbia County Independent, I enjoyed reading Margaret Schramm’s history of the city of Hudson. Hudson is an old town with a venerable history and her account covers a lot of that history. I, of course, am a geologist and my idea of history extends a lot farther back into time. I see the city of Hudson as a place which has been here since the formation of the Earth. I am fond of waving my arms and orating about how any spot on the globe has been there for more the four and one half billion years.

The Hudson vicinity has had a long geological history and glimpses of that history can sometimes be seen in the rocks. I recently had the experience of seeing such a moment of time when I traveled 1 mile south on County Rt. 29, from its intersection with Rt. 23B. At that location the road is funneled through a narrow passage. Claverack Creek closes in from the east and a large cliff rises to the west.

My attention was on a sequence of sedimentary rocks. I pulled over and began to look them over. The unit was familiar to me; it is the Manlius Limestone, something that I see all across New York State. It’s thinly-bedded, fine grained strata took me back about 420 million years to a time when most of New York State was submerged by the shallow waters of something called the Helderberg Sea. This was a very warm sea; North America lay just a little south of the equator. The “City of Hudson” was enjoying a very tropical climate at that time.

The thin laminations of the Manlius tell us a lot about what the City of Hudson was like back in the early Devonian. They are the product of what are called algal mats. Once this was a mud flat and sheets of primitive algae grew on its surface. You might have to travel as far as the Persian Gulf so see something like this today. But there is much more to see here.

There was a fine overhang in the cliff right where I parked. When I looked up at the stratum exposed beneath it, I was surprised to see one of those little wonders of geology; that surface was covered in mud cracks. 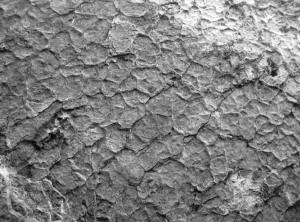 Mud cracks – averaging about 4 inches across each

Mud cracks are imprints that formed at approximately the time of deposition. They speak to us of a moment in time 420 million years ago. Mud cracks are also called desiccation cracks, which is to say that they formed at a time when the sediment was baking in the sun.

I reached up and touched the surface. To touch such a rock is to literally be in contact with the past. Now I became a time traveler, and in my mind’s eye, I was back in the early Devonian and on that mud flat. I had arrived at noon on a clear day in August. The Sun’s heat seemed to pound down on the surface. There was not even the slightest of breezes and the hot air pooled on the ground. In the distance, I could see rising currents of air distorted by the heat. This is the stuff of mirages, and near the horizon there was the appearance of an expanse of water.

But there was no water. In fact, recent days had witnessed a terrible long low tide. The ground was bare marine sediment and it positively blistered in the sun. Over time, all moisture had been baked out of the ground. The sediment then slowly shrank and, as it did so, it began to pull into polygonal masses bordered by polygonal cracks.

If you ever get a chance to see a pond which has dried up in some summer drought, you will see the same thing today. But I was in the Devonian and parched mud cracks stretched out in all directions. It was surreal, something Salvador Dali might well have enjoyed painting.

And it was a dead landscape. I felt very small and alone in this inhospitable Devonian plain. Then I pulled my hand away from the rock and all around me was the cool greenery of a late spring. This is Hudson as it is today, but not as it has always been.