I mention the compass direction south, 30 degrees west from time to time in my columns. That’s a pattern that shows up a lot in the Hudson Valley and also throughout the Catskills. Long, straight fractures, called joints, commonly show orientations the same or similar to this. Folded bedrock strata, in the region, dip into the ground on this orientation. Even the Wall of Manitou, the great Catskill Front, displays roughly this same compass direction. The south, 30 degrees west compass reading is nearly everywhere in our region. It is Nature presenting us with a pattern. Nature does that to piqué our curiosity. She knows how to do that; she is good at it!

Hikers stand near to a southwest oriented joint 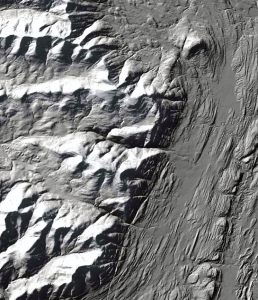 The Wall of Manitou with its SW orientation

The job of a scientist, when confronted with a pattern like this, is to search for a theory to explain it. Let’s find a theory.

I need to say something first though. The proper scientific meaning of the word theory is widely misunderstood. A theory, to we scientists, is not a guess or a hunch. It is an explanation which is in accord with a wide variety of observations. It is an explanation that fits the facts. A well founded theory has been subjected to a lot of study. We say it has been “tested” and it has passed all of its tests. A good, well-tested theory is regarded as fact.

And we are going to need one very good theory to explain all that we have seen. We need to find a single event that folded all the rocks of our region, all in the same direction. That marvelous theory must explain all that joint fracturing as well. Finally, it would be good if it accounted for the Wall of Manitou. That’s not going to be easy. Our theory is going to have to be a jack of all trades.

Geologists were stumped by all this for a very long time. Decades ago, it was not unusual for very talented geologists to stand on the highest ledge of the Catskill Front, gaze out to the east, and wonder just how those folds, joints and the great escarpment itself had formed. We began to come to an understanding in the middle and late 1960’s. That was the exciting time when we first recognized the theory of plate tectonics, the greatest geological discovery of the last century.  That provided the key to the problem.

Many of you likely know the elements of plate tectonic theory. It argues that the Earth’s crust is broken up into many large pieces, called plates. North America is one plate. Europe is another, and so is Africa. The plates are mobile and drift across the globe, occasionally colliding with each other. The collisions of two large plates can result in a great mountain building event, something we call an orogeny. Over the past several tens of millions of years, for example, an eastern Pacific plate has been colliding with South America; the results are the Andes of the Andean Orogeny.

We had a major collision east of the Hudson. This event has been named the Acadian Orogeny. It began a little less than 400 million years ago when North America experienced an immense collision with another huge landmass, something you would likely call Europe. The best way to come to understand such things is to look at today’s world and visit a place where analogous events are currently going on. That place would be southern Asia.

Starting tens of millions of years ago, the plate we call India drifted across the Indian Ocean and collided with southern Asia. The collision of two land masses of this sort began an enormous mountain building event. The rocks caught between the two, were compressed and squeezed for millions of years. An enormous mountain range, the Himalayas, is the product of all this. The folding of its rocks is likely to be roughly parallel the collision. Many tens of millions of years later it is not uncommon to see the breakup of such an enormous “supercontinent.” Imagine, for a minute, if India detached from Asia and drifted back out into the Indian Ocean.

All this is what seems to have happened here. A landmass, much like India, collided with North America. We call that colliding landmass Avalonia and it approached from the southeast. The collision compressed rocks into the northeast-southwest pattern that we have been looking at. Later Avalonia split and drifted back to the east. With that, the long compressed rocks experienced the relaxation which triggered the brittle fracturing that made up the joints, again with the same compass reading.

Our theory fits the facts and explains our observations. It explains why south, 30 degrees west is so important around here. That’s what makes this theory so powerful. We haven’t yet, however, fully explained the Wall of Manitou. We may need another theory for that.

Reach the author at titusr@hartwick.edu Join his facebook page “The Catskill Geologist.”