By Johanna and Robert Titus

A GEOLOGIST never knows when he is about to take a trip into our distant past. It’s just part of the job. I began one of those time travels recently when I was visiting the Livingston mansion “Clermont” on the Hudson. Just north of the visitor’s center I saw a fine Honey Locust tree.

The Honey Locust is certainly not the greatest of trees; there are bigger and prettier ones. Nevertheless, there is something very special about this species. Honey Locusts are “armored” with very dangerous looking spikes. These can be three or four inches long, and often they occur in mean-looking clusters. The biggest of those is found on the lower reaches of the tree’s trunk. Up above, there are plenty more strung out on the lower branches. 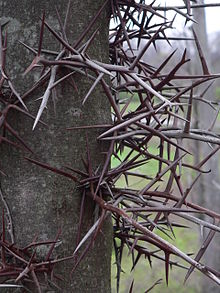 Brush up against this tree and you will quickly find out what they are for; they are vicious defense mechanisms. The lower branches hang down, and seem to reach out with their spikes as if intending to do harm. Browsing mammals will soon find out, and long remember, the dangers of trying to eat the foliage of this tree.

But who are these spikes defending against? Your might guess the White-tailed Deer, especially if you are among those who have prized shrubbery in your yard. But White-tailed Deer would hardly be bothered by these spikes. They have slender snouts and they find plenty of space to pick between the spikes. No, locusts have never much worried about deer.

But, if it is not deer, then who? There are no other obvious browsers in today’s woods so why do the trees go to all that trouble of growing those nasty long spikes? Those spikes, also, had to be aimed at something a lot bigger than a deer. And a lot taller too; they reach up to about 15 feet or so above the ground. There is a real problem here; the fact is that there simply are no big creatures in today’s world that threaten our locusts.

But there were some a long time ago. Back at the end of the ice age the Hudson Valley did have a great herbivore which might very well have pestered our Honey Locusts. And it was plenty large enough too. It was the Mastodon.

Modern elephants have a bad reputation for tearing up forests. They love to pull down limbs and they are perfectly capable of stripping bark off the lower trunks of trees as well. In fact elephants can virtually create their own habitat. They destroy so many trees that they break up the forests, creating lots of meadow in between the remaining patches of forest.

That rambunctious behavior creates just exactly the right habitat for Honey Locusts. Locusts like broken forests, preferring to be right on the border between meadow and trees. So, it would seem that evolution had cleverly adapted the locust for life with the Mastodons. These great elephants created the habitat that was just right for locusts. At the same time the spikes protected the locusts from any potential damage from the Mastodons.

And there was more: the Honey Locust seed pods very likely appealed to the Mastodons. Those seed pods hung just above the spikes; the elephants could just reach beyond the spikes, eat the pods and then deposit the seeds elsewhere within their droppings.

All in all the Mastodons and Honey Locusts enjoyed a very fine symbiosis. But then, abruptly, it all ended.

The Mastodons went extinct about 11,000 years ago. The locusts lost the elephants that had helped them so much in reproduction. They have continued to survive to this day, but surely they are not as successful as was once the case. Still, in the end, it is quite the concept to contemplate. These trees and their long spikes vigilantly wait for the elephants that will never ever come again. It is only the ghosts of mastodons that still haunt our forests.

Robert and Johanna Titus will be speaking at Clermont in September. See their website.