I have been recently working with the Woodstock Land Conservancy so I know what kinds of good work such civic groups do. I wasn’t surprised to see the Columbia County chapter in the news recently. Maybe you read about the new 47 acre parcel of land they have opened up to the public in Philmont. The centerpiece of this site is High Falls. 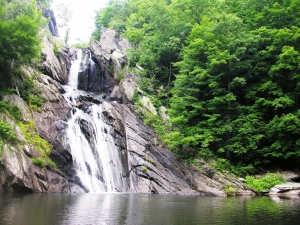 The falls are well named; they tumble over a precipice of about 150 feet, along a river with the improbable name of Agawamuck Creek. I had not been aware of the site so I snatched my wife and the Professors Titus were soon off to Philmont.

The conservation area is easy to locate off Roxbury Road and there is good parking. The trails are well marked (unless you are color-blind; they only have red and green markers). We followed the green trail out to the overlook with its fine view of High Falls itself. We found a strong flow of water so it was a good view.

But I hadn’t come to see the view; I was there to get a story. As we had hiked the trail we had passed several good outcrops of bedrock. If you take one of these trails here, you will see fine-grained rocks with a dull sheen to them. They are called phyllites. These rocks are metamorphic. That means they had, during some ancient New England mountain building event, been subject to intense heat and pressure. Metamorphism is, quite literally, the cooking of rocks. Sadly, I had not come all the way out to Philmont to do a story on dull looking bedrock; I needed a better story. I will do the rocks another day.

We hiked down to the upper blue trail to the bottom of the canyon. Canyon is the right word for where we were. Very steep slopes, often with rock cliffs, towered above us. That’s were I found my story.

The canyon took me back to the end of the Ice Age, about 14,000 years ago. That was a very, very wet time in the history of Columbia County. It would be fair to describe the whole landscape as soggy from the recently melting glaciers. Agawamuck Creek is a fairly long flow of water today, but back then it must also have been a very powerful, and erosive, stream. That’s when the canyon formed.

If you know anything at all about Niagara Falls, then you will find the story of our little canyon to be a familiar one. Niagara Falls is a rather erosive site. Water flowing over the lip of the falls cascades downward, and is very erosive when it hits bottom. It has carved something called a plunge pool at the bottom. The deep plunge pool undermines the stability of the cliff above and eventually great masses of rock break loose and fall into the pool.

Over long periods of time, in this manner, Niagara Falls has worked its way back, retreating upstream towards Lake Erie. Someday, Niagara will reach Lake Erie, at which point the whole of that great lake will cascade into the St. Lawrence River system. That will be an exciting chapter in the history of the Great Lakes!

Well, my point is that High Falls has, similarly, been working its way back upstream. The canyon below Niagara is miles long; the one here is much shorter, only about a quarter mile in length. So High Falls is a scale model of the greater and far more famous Niagara, complete with a regulation plunge pool. I think that is a notable and that is my story.

But there is a secondary story here; it’s about hydropower. Philmont was once a mill town. The Agawamuck, back in the middle 19th century, was dammed and along with some aqueducts that provided enough hydropower to support a number of mills. We drove up Summit Road to “factory hill” and there we saw a fine old brick mill, just above the falls. It is well-preserved artifact of local 19th century industry. It’s been closed a long time. Perhaps that is unfortunate; we are seeing global climate change associated with the burning of fossil fuels. Maybe the old mill should never have been closed.

Contact the author at randjtitus@prodigy.net. Join his facebook page “The Catskills Geologist.” Visit his blog at thecatskillgeologist.com.