One of my favorite views in all the Catskills can be seen as you drive south on Rte. 30 on your way towards Grand Gorge. You go around a broad curve in the road and there, off in the distance, is Grand Gorge: not the town but the actual, genuine, authentic gorge itself. If you look in the distance you will see that break in the mountains, a hole in the horizon. This is the gorge; well at least it’s the entrance to that gorge. It’s all just a little bit complex actually. The left, eastern side of the hole in the hills is Irish Mountain. The right, western side is Jump Hill. The two of them combine to create a remarkable landscape form.

What is most interesting about it is that it seems to form an almost perfect semicircle. That may not be an accident. When I geologist sees such a perfect half circle in the landscape, he is very likely to think about the Ice Age and wonder if glaciers had not played a role in this. They very well may have. Let’s learn about what glaciers do in places like this.

When a glacier flows through a relatively narrow valley such as this one, it is likely to modify the landscape. The passing ice grinds away at the bedrock and wears it down. Given enough time – and with geology there is always enough ti 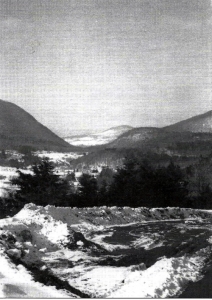 me – the ice will carve a nearly perfect semicircle. It’s always the bottom half of the circle.

There is a reason that this shape develops. The semicircle is the shape that offers the least frictional resistance to the moving ice. The glacier will grind away at the bedrock, shaving off bits and pieces here and there, until it has achieved this semicircle. Then it will have exactly that minimum of frictional drag exerted upon it. It will, in fact, continue to wear away at the bedrock, but that wear serves only to deepen the semicircle, not change it in any other significant way. The ice can continue to flow for years, and decades and centuries. And that is what I was looking at from my Rte. 30 perch. I gazed to the south and, in my mind’s eye, it was many thousands of years ago, and the glaciers were still flowing down the valley.

This glacier is one that I know quite well. It is the Schoharie Creek Valley glacier. It entered the Catskills from the north and flowed south within the confines of the Schoharie Creek Valley.  It passed Middleburgh and flowed through Breakabeen. As it approached Grand Gorge it had a choice. One branch of its ice veered off to the east and continued, through Prattsville and on up the Schoharie Creek Valley toward Kaaterskill Clove. It would reach a location named “Mosquito Point” and there it would collide with another glacier coming from the east. That other glacier had entered the Catskills at Kaaterskill Clove and it had flowed through Tannersville and Lexington on towards its collision at Mosquito Point. The collision of two glaciers might seem like an unlikely notion, but they do occur. And that is the option that brought this branch of the valley glacier to an abrupt halt. 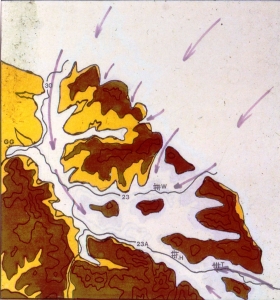 But that was only one option. The rest of the Schoharie Creek glacier flowed south through Grand Gorge and on into the East Branch of the Delaware River.  That is the flow of ice I had been watching. It was funneled though the Grand Gorge gap in the mountain and it was forced to carve that gap into the form that had so fascinated me. This glacier would continue on to the south. At Margaretville it would veer to the west and continue across what is the Pepacton Reservoir today. It would pass through Downsville and eventually, somewhere to the west, come to a halt, this time without colliding with any other ice.

As you can see, all this is quite a story. The great valleys of the Catskills all had their own valley glaciers. Each of them flowed mostly to the south and each of them carved their valleys into something resembling a semicircle. Had the Ice Age lasted longer in the Catskills, then all of the valleys would be perfect semicircles. This is commonplace in more heavily glaciated landscapes such as those of the Alps, but our Ice Age was just a little too short.

It is only in a few places that we can see those beautiful and striking semicircles, and the one at Grand Gorge is the easiest to visit. Some day let’s climb up into the mountains and see some other semicircles, some much better ones. Reach the author at titusr@hartwick.edu or join his facebook page “The Catskill Geologist.”