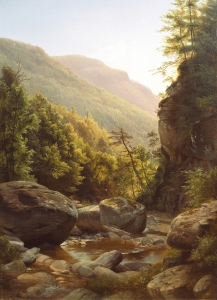 I don’t think there are many of us geologists who are not very fond of the Hudson River School of Art. The artists of this “School” created America’s first ever national style of art. Starting right here in the Catskills, during the 1820’s, these landscape artists painted the American wilderness and they got it right. There is something in the spirit of their images that speaks directly to geologists. We feel what they felt when we are out “there.”

Not surprisingly, then, my wife and I have been active members of the Thomas Cole National Historic Site at Cedar Grove, Cole’s home in Catskill. Thomas Cole is widely thought of as a founder of the Hudson River school. Cedar Grove is dedicated to preserving his memory and to honoring the Hudson River artists in general. In its few years of existence Cedar Grove has established itself as a leading, even prestigious center of art scholarship.

Back in 2010 Cedar Grove has opened a new exhibit of paintings by Hudson River artists. That’s not unusual; they have done so every year since 2004, but this one was different. Called “Remember the Ladies,” it is devoted exclusively to the women artists of the Hudson River School. We didn’t want to miss it so we were there the very first day, and it was well worth the visit. About 25 works of art were on display, including some by Cole’s sister, Sarah, and daughter, Emily. But my wife and I best enjoyed one special canvas by Harriet Cany Peale, the second wife of renowned artist Rembrandt Peale.

Mrs. Peale painted in the Catskills in 1858 and her painting Kaaterskill Clove was chosen for the cover of the exhibit‘s 2010 catalog. It is a gem! We thought that we recognized the location where she did this work and resolved to go find the site. We thought it was just below Fawn’s Leap which you must pass by on your way up the clove on highway, Rt. 23A, just west of Palenville. You have to cross two bridges along the way and Fawn’s Leap is a waterfall just above the second bridge. 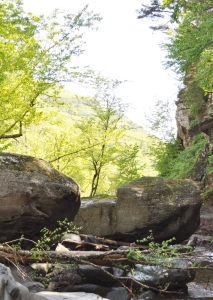 If you wish to visit where Harriet Peale did her painting the visit on a weekday morning before many people have yet arrived. There is distant parking uphill and downhill; nothing is available right there. Then walk to the bottom of that second bridge, the uphill one, climb down into the clove and then head upstream about 50 yards. There you will find a spot where a mountain cascade comes crashing down from above. Turn around right there and look back downstream. Like magic, you are transported back to 1858 when Harriet Peale was here. You are standing at the very spot where she worked and you can see what she saw – exactly what she saw.

There is a sense of kinship that this sort of experience brings. She and we came here for the same aesthetic reasons. We and Harriet Peale shared exactly the same sights even though we were separated by more than 150 years of history. The Civil War and two world wars have come and gone during this time. The electric light, the plane, the auto and the computer have all been invented, but this location has remained almost exactly as it was. We were just barely able to see the railings of today’s modern bridge and we could hear the passing traffic. But those were the only perceptible changes. In every other sense nothing has been altered.

But our sense of time was so acute here. We saw the great boulders that she painted and we were transported back to the end of the Ice Age. We understand the Ice Age history of Kaaterskill Clove and we know that, back then, a glacier had entered this clove and advanced up, all the way to South Lake. That glacier probably swept these boulders along with it. They are not just picturesque rocks; they are history, Ice Age history.  These boulders are called glacial erratics. They were plucked loose somewhere up the Hudson Valley and carried to this location by the advancing ice. After the glacier stopped advancing, it began to melt. As it melted away, these boulders emerged from the old ice. They were left at just this spot by the melting ice, and they have not moved an inch since that time.

And “that time” must have been no later than about 13,000 years ago. Now we stopped thinking of this place as it was during the Civil War; we saw it as it was when the pyramids were being built, and then during time much older than even that. We had developed a new appreciation for the scenery of the Catskills. For more about this summer’s exhibit at Cedar Grove go to http://thomascole.org  Find more at https://thecatskillgeologist.com