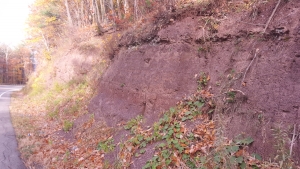 Red strata along road on Franklin Mountain south of Oneonta

The Catskills are among the most scenic regions in eastern North America. You already knew that, but one of the reasons is the brick red color of much of our bedrock. Look around and it won’t take long to find, here and there, a handsome outcropping of brick red sandstone and shale. The tint goes well with the green of the summer foliage and makes a picture perfect landscape. But, with so much of that red rock, there must be some cause, a reason for the tinting. There is and this week let’s learn about it.

The best place to begin to account for the color is to learn what causes it. Our brick red is the color of the mineral hematite, an iron oxide. The “hema” part of that refers to blood. Whoever named the mineral must have lived where there weren’t many bricks. He saw the color as that of blood. The is debatable; real blood has a much more intense hue of red than does hematite.  If I could have named it, I would have called it “brickite,” a silly name but a more descriptive one.

The iron oxide of hematite has the composition of Fe2O3 and it does, almost always, display a brick red color. In fact it is the mineral that does give bricks their color. The more iron in the brick’s clay to begin with, the more iron oxide that forms as it is fired. But we are not talking about bricks; we are speaking of rock. Hematite does not need to be fired in order to form red rocks. It typically forms in the soils of warm tropical terrestrial environments. When ancient soils are porous and well-aerated, then oxygen from the air can combine with iron to make the iron oxide rich red soils. Warm climates speed things up.

Tropical landscapes, in places such as the Amazon Basin and central Africa, commonly produce a red soil type which has been called a laterite. Other warm landscapes, all over the world, very often have red soils. You have probably heard of the Georgia red clays; these are home-grown versions. Where erosion cuts into any of these soils you can see the red hue.

But, somewhere along the line, I have to get back to the Catskills and why we have so many red rocks here. The answers take us back about 375 million years to a time when our Catskills were a great tropical delta. This was called the Catskill Delta and it was huge: the size of today’s country of Bangladesh which lies upon the Ganges River Delta. Our Catskill Delta lay in a tropical climate. Back then North America had drifted to about 20 degrees south of the equator and that put it squarely within the warmest climate belts.

The Catskill Delta probably had a seasonally rainy climate (some people debate this). One part of the year saw a lot of rain, the rest of the year was dry. The rainy season made our local soils chemically active, but during the dry seasons, they became parched. That’s when air got into them and that is when the iron oxides began to form. And, of course, that is when the soils became red, brick red. The Catskill Delta must have been a land of red soils and today our Catskills are a land of red sandstones and shales.

So, where is the best place to go and see all this? I recommend the drive up Rte. 23 as it approaches Windham from the east. Let’s take in the whole highway. Starting down in Cornwallville, there is a sequence of fine outcrops which extends for three or four miles along the highway. As you drive up the hill you are passing through about 1,500 feet of sedimentary rock, most of it is red. It is a fine sequence which speaks of the great size and thickness of the Catskill Delta deposits and it makes a most scenic want to take a good look, but you will be rewarded by the effort. Their coloration is wondrous. Once you have trained your eye to notice this sort of thing, it is good to keep the image in the back of your mind as you travel the region. Begin to notice how widespread the red strata are. Let each outcrop take you through a window of time, back to the time of the Catskill Delta. It is a great trip. Contact the author at titusr@hartwick.edu    Join his facebook page “The Catskill Geologist.”