Once again, this year, I will be doing a Hudson Valley Ramble at Olana (Sat. Sept. 9, 2017, at 10:00 AM).  My topic will be “Unplanned views at Olana.” It’s one of this year’s many Hudson Valley rambles. Olana is Frederic Church’s fabled Persian Revival home, perched high atop Church Hill, across the Rip Van Winkle Bridge from Catskill. Church, the great 19th Century Hudson Valley painter, built Olana and designed its 250 acres of landscape. He decorated the property with what are called “planned views.” Those are locations that were landscaped to enhance the scenic views that had already existed. These are grand panoramas of the Hudson River, the Catskills, and the Taconic Mountains. Church devoted all of his considerable artistic skills to developing these views and they are still, more than a century later, wonders to see.

I will take my participants to see several of these planned views, but my focus in not so much in seeing the modern landscape as in viewing images from the distant geological past.  We will “see” the glaciers that once overrode this hill and we will descend to the depths of the ocean that, so long ago, swept across this site. It’s a fun trek; I have done it many times and I enjoy it very much.

Olana has a rich and varied geological heritage and there is much to explore. But, at the same time, Olana can keep its geological secrets. One of them has defied all my best efforts. That is the mystery of where is the Olana pothole. Potholes are commonly seen in the bedrock floors of powerful rivers. Swirling currents of water pick up cobbles and gravel and sand and use that material to essentially drill a hole into the bedrock. The drilling continues until, in some cases, perfectly circular potholes, 25 feet or more deep, can be formed. These are commonly seen on many streams in the northeast. Many of them probably date back to the late Ice Age when melting glaciers provided vast quantities of meltwater. There is a well known example of numerous potholes at a location called Moss Island at Little Falls on the Mohawk River. It was designated a National Natural Monument in 1976.

Well, sometime back in the 1870’s, excavations were underway at Olana to recover stone for roads which were then being built. Accounts, written back then, indicate that those diggings occurred at the base of a 75 foot tall cliff of black shale. Workmen encountered a pothole that had lain buried, probably for many thousands of years. They reported the find to geologists and sometime thereafter excavations began in serious. After what must have been a lot of hard digging this pothole turned out to be eight feet wide and 25 feet deep. The walls had a polished appearance to them and, still within the hole, were polished and rounded cobbles, the very ones that had been swirled into the ground so long ago. It was an interesting discovery and several articles about it appeared in the scientific literature. Frederic Church appears to have been nonchalant with it all; he remarked in a letter that he was the proud owner of “a hole in the ground.” 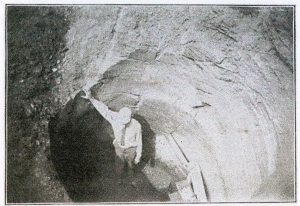 Well, all this, of course, was of interest to me. How could it not? But the most pressing and immediate question I had was – where was the pothole? There were no precise directions in the articles about it. One said it was about a half mile from the Hudson River. The other placed it at 300 feet above sea level. Both placed it at the bottom of that 75 foot high cliff of black shale. I got out my map and altimeter and put on my boots and went hunting. But after a few hours of searching all likely places, I had come up empty. I don’t know what happened to the hole. It is always possible that it was destroyed by the quarrying activities of the 1870’s. Nobody else has found it either.

But I had some other problems to deal with. There are no bedrock stream channels here. I needed another explanation for the origin of this pothole. And that solution would take me back to the end of the Ice Age. All this conjures up quite an image of what it might have been like at the Olana site at that time. The Hudson Valley had been filled with the ice of a great glacier, but now it was melting away. I could imagine the remnant ice, abutting well up the slopes of Olana. Masses of water were pouring off of the melting glacier and a lot of that was funneled down a hole in the ice. It was that flow that bored the pothole. For me it’s a whole new “unplanned view” at Olana.

Reach the author at titusr@hartwick.edu Join his facebook page “The Catskill Geologist.” You might want to visit www.Olana.org