A few moments in time

Like many paleontologists, I can well remember the first time I visited a dinosaur. My parents took me to the American Museum of Natural History in New York. There was the magnificent full skeleton of a Brontosaurus. I can remember looking up at it. I was about seven, so that beast looked pretty big to me. So too did a nearby Tyrannosaurus. It’s an experience that helped lead me, like many other youngsters, to a career in the study of fossils.

Every child should have a moment like this. But as an adult, I am often more impressed by things other than size. I am more philosophical now. Time means more to me now than back then; after all, I have known so much more of it. And one type of fossil that impresses me the most is called the trace fossil. That’s something you might well not be familiar with so let me explain. Most fossils, such as those towering dinosaur skeletons, are body fossils; they preserve parts of the original creatures. They are bones, shells or teeth and have lasted so long because they are composed of resilient materials. They are great fossils, but not the only kinds we see.

Trace fossils are different; these preserve the activities of ancient organisms. You can be forgiven if you ask how activities can be preserved in rocks. It does not seem intuitive, does it? But let’s begin with the best known of the trace fossils: the dinosaur footprints. They illustrate what I have in mind. The sizable three toed footprints of dinosaurs are actually quite common. The old monsters walked around in mud and left footprints which eventually petrified to make the most wonderful fossils. Walking is an activity and so these are trace fossils. There are quite a few locations where these can be seen in the Connecticut River Valley of Connecticut and Massachusetts. Someday I will describe one of them for you to go visit. 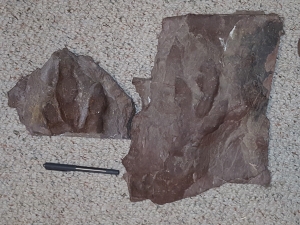 But, what I have in mind are the traces of creatures that are a lot more modest. These fossils are so humble that they don’t even have a proper name. These are the traces of animals that burrowed across marine sediments almost 400 million years ago when our region was beneath the waves of the ancient Catskill Sea.

Take a look at my illustration and see what I am talking about. This is a slab of local sandstone. It is from near the top of an outcrop that lies along Rte. 23, just east of Five Mile Woods Road, just east of the town of Cairo. That outcrop was overrun by a glacier back during the Ice Age, and that glacier polished this surface, bringing those traces into sharp detail. This sandstone was once lying upon the bottom of the sea and that seafloor was alive with living creatures. Often I see the shells of ancient invertebrates on such sandstones, and a number of such fossils have been found at this outcrop. 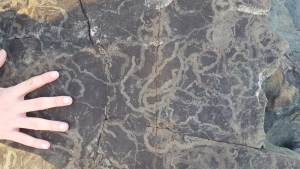 Notice the back and forth motion displayed with these traces. Some sort of creature was moving in this fashion, probably right on the floor of the old sea. There is a series of small “wiggles” inside of the larger ones (the third photo). This is pretty complex behavior from what must have been small and simple animals. These lines are the traces. Once, long ago, some sort of a simple invertebrate animal was mucking about across the sediment at the bottom of that sea. Today, lot’s of animals live in this sort of habitat. They dig across the mud. They actually travel, and in so doing, they leave their burrow traces behind. 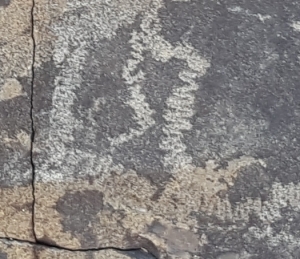 Close up of same burrows

What kind of animal was it? I don’t know. If you force me to answer the question I would first guess that it was some sort of a worm, but I really don’t know. Some of our readers have observed snails producing these sort of movements. Where was this creature going? Here I can only guess that it was just wandering and it did not know itself where it was going. Worms and snails don’t carry maps you know; they have no idea where they are going.

What was this creature doing? Here I can come up with a reasonable answer: it was very likely looking for food. That’s the motivation for a lot of animal activity. It is even possible that, if it was a worm, then it was eating the very mud it was digging through. Modern earthworms do that and there is no reason to suppose and ancient worms did not. Snails make these motions as they scrape algae off of the sea floor.

In the end, however, what is so remarkable about this fossil is how ordinary it is. This is not the skeleton of a towering dinosaur; it only records the very existence of a humble invertebrate animal; there was nothing remarkable about what that creature was doing. It was simply going about its daily routine on the floor of an ancient sea. It is the extraordinarily everyday nature of this that makes it of note. When we look at this fossil we are sharing a few minutes or so in the life of an invertebrate animal. I find that astonishing. Contact the author at titusr@hartwick.edu or find more at the facebook page “The Catskill Geologist.”