Our reader’s rocks: the submarine avalanche

Dear Professor Titus: I found this peculiar looking rock at my son’s new home. This rock came from an outcropping along the Mohawk River near the Twin Bridges of the Northway. What are the markings on the surface? What can you tell me about them? Mrs. Deborah Teator, Greenville. 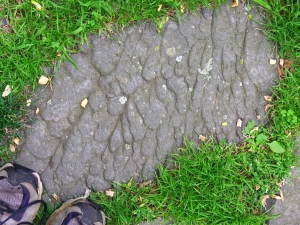 Dear Mrs. Teator: Yes, this is a very interesting rock and I can tell you a great deal about it. The state geological map indicates that your rock is from the Normanskill Formation and that is a unit that I have been meaning to write about anyway so I am glad that you asked about it. The Normanskill makes up much of the bedrock in the Hudson Valley and it is a very important unit of rock in that region. It has quite a story to tell, when you look through a window of time.

If you know your way around the bottom of the Pacific then you will know what a marine trench is. If not, take a look at most any globe and find the dark blue stretches out there in the middle of the Pacific. The best one is the Marianas Trench, adjacent to the Marianas Islands. A trench is just what it sounds like; it is a long deep crease in the floor of the ocean. I am not kidding about the deep part; the Marianas Trench is about 36,000 feet deep, deeper than Mt. Everest is tall!

The slopes of a trench are, not surprisingly, very steep. Because of that, the soft sediments that accumulate on those slopes are very unstable. If anything jars those slopes, then it triggers a submarine avalanche. Great masses of sediment are kicked up into big smoky looking plumes of dirty water.  These sediment laden plumes are denser than surrounding seawater and thus they, slowly at first, start moving downhill into the depths. These “density currents’ soon pick up a lot of speed and they become submarine avalanches. These are, like their snowy counterparts on land, very dramatic events and they reach speeds of 30 to 50 miles an hour.

They can be destructive events as well, just like the ones on land. These fast moving masses of dirty water are very erosive. They sweep across the muddy deepwater slopes and pick up more sediment and carry it away. That makes the current bigger, heavier and even more powerful. Eventually these avalanches reach the bottom of the trench and the slope flattens out. That’s when the currents slow down and, with time, come to a rest. That is also when the sediment is deposited. The event has a technical term; it is called turbidity current. The resulting sedimentary deposit is called a turbidite.

Toward the end, when the masses of dirty water are slowing down, they press into the soft sticky mud below, and they create some very recognizable features. These are called sole marks and it is sole marks that adorn the surface of Deborah Teator’s rock. What I am saying is that this is a “petrified avalanche!” That might, at first, seem impossible, but my description is of something that marine geologists have observed in the modern Atlantic Ocean. We simply know that these things happen.

So, all this speaks volumes about the Twin Bridges vicinity. Back in time, during the Ordovician Period, about 450 million years ago, this was a very different place. This was a deep marine trench. How deep? I don’t know but 20,000 feet seems reasonable. It was a very quiet, very dark seafloor. But, every once in a while, an awful catastrophic submarine avalanche swept by. After it was over, things quieted down again. The next time you are crossing the Twin Bridges, please remember to think about all this. It really rearranges your sense of reality. Doesn’t it?

Do you have an interesting rock, an interesting outcrop or some puzzling landscape feature? Then e-mail the author at titusr@hartwick.edu or write him at Dept. Geology, Hartwick College, Oneonta, NY, 13820. Send photos if you can. 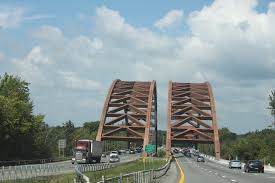