The limestones of Noah’s flood?

Perhaps you have seen those ads on TV for Ark Encounter. That’s the Noah’s Ark theme park in Kentucky that opened in 2016. The ad features a family of adorable cartoon giraffes visiting the ark and marveling over how very large it is. The park, in general, is centered on promoting the views of young Earth creationists. These are Christian evangelicals who believe that “true science” indicates that the Earth is about 6,000 years old and was supernaturally created by God at that time – along with the rest of the universe! They go on to describe the world’s fossil and stratigraphic record largely in terms of the Biblical account of Noah’s deluge. Such creationists explain that the limestones, shales, sandstones and most other stratified rocks were catastrophically produced during this violent event.

Young Earth creationists base much of their geology from the Genesis chapter in the Old Testament. But beginning in the 1790’s, the then still young science of geology began to recognize a different view. We call this uniformitarianism. Briefly, we geologists look at ancient rocks and then look at the modern world to see how similar earth materials are currently forming. We, for example, visit large swamps and easily imagine how similar vegetations long ago hardened into ancient coals. We can visit the bottoms of modern deep oceans and see dark muds which will someday harden into black shales. We sum up uniformitarianism with the phrase “the present is a key to the past.” Geologists typically learn as much about the modern world’s sediments as they do about the ancient world’s sedimentary rocks. Uniformitarianism is the foundation of geology. And that includes the research we have used for most of the nearly 250 articles we have written about your local geology here in the Woodstock Times.

So, there is a stark contrast here; young Earth creationists wander the Woodstock region and see stratified rocks that they envision as having formed by and in the waters of Noah’s deluge just thousands of years ago. We geologists see the same strata and are carried into a uniformitarianist past. We see stratified rocks deposited between 369 and 419 million years ago, during a time called the Devonian. Who has it right? That’s an important question.

It’s a topic we will want to deal with in at least several columns. But, today let’s visit some of those rocks that make up the oldest parts of the Devonian stratigraphy here in Ulster County. See blue horizons at bottom of our stratigraphic cross section below. Those are limestones. The best place for you to visit limestones is along Rte. 9W where it passes through the Kingston malls. Almost all the rocks there are limestones. You can see more limestones along Rte. 32, just north of Saugerties. If you want a nice day trip, go farther north and visit the limestone cliff at Thacher Park. At all these places you will see the thick gray strata of frequently fossiliferous limestones. 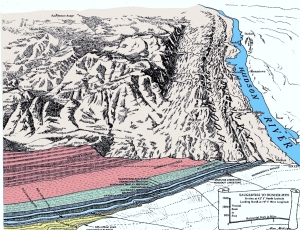 Uniformitarianism takes us to modern locations where limestones are forming today. The best and nearest are Florida and the Bahamas. Both are characterized by shallow tropical seas, typical of almost all limestones. Each of these is composed of relatively recently formed limestones and their shallow seas are floored with limey sediments. What, exactly is limestone? One definition focuses on its composition. It is a rock composed of the mineral calcite, calcium carbonate, CaCO3.Take a look at our photo; it shows a view of a microscopically thin sheet of a typical fossiliferous limestone. The dark particles are fossils, fragments of ancient shellfish skeletons. All of these are composed almost entirely of calcite. The clear white material in between those fossils is calcite cement. 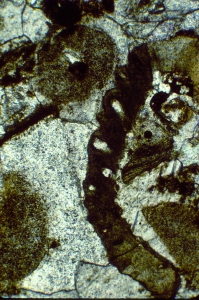 Both the fossils and the cement speak to us of vast lengths of time. Countless generations of invertebrate animals produced the shell material. The chemical processes that formed the cement speak to us of equally endless lengths of time. Some estimates are that it takes about a thousand years to produce a foot of limestone. And there are several hundred feet of limestone in our local Devonian. And those strata make up only a small fraction of that Devonian.

And then there is another thought. How could limestone form in a global deluge? There is no imaginable way that flood waters could form limestones. Limestones are strictly chemical and biochemical in origin. Uniformitarianism speaks to us clearly; limestones form in shallow tropical seas, over vast lengths of time. The flood hypothesis does not work.

Contact the authors at randjtitus@prodigy.net. Join their facebook page “The Catskill Geologist. Read their blogs at “thecatskillgeologist.com.”