The Black Shales of Noah’s Flood

The first stirrings of modern science came in the late 1600’s. At that time the earliest geologists made efforts to classify rocks according to their apparent ages. These pioneering geologists were generally quite religious, and their classifications were aimed at fitting rocks into the Genesis account of Earth history. Accordingly, there were Primary, Secondary and Tertiary rocks. Primary rocks, the oldest, came before Noah’s flood and Tertiary rocks came after it. The great majority of stratified rocks were classified as Secondary, and they were thus thought to have been deposited during the flood. In short, Noah’s flood was seen as accounting for most of the world’s stratified geology. Modern young Earth creationists would return us to something very much akin to this. They struggle to fit most of the world’s stratigraphy’s into some sort of flood chronology.

By the 1790’s geologists began peering back through seemingly endless lengths of time into an increasingly distant past. They developed the concept of uniformitarianism, the guiding philosophy of geology. Briefly, they thought of the present as being a key to understanding the past. The modern world’s sediments came to be seen as analogues to petrified sedimentary rocks. These early geologists began constructing a time scale consisting of discrete chapters in Earth history. That time scale largely replaced the earlier Primary, Secondary and Tertiary classification.

Our Catskills rocks mostly formed during one of those chapters, the Devonian Period, between 419 and 369 million years ago. Most of the earliest Devonian rocks were limestones and we talked of them in our last column. Typically, Catskills limestones are succeeded by black shales, younger and wholly different sorts of rock. See the black horizons on the cross section. Our black shales are thinly laminated and with a shiny black color, much like the black of Darth Vader’s helmet. They formed in an ocean that was much deeper than that of the limestones which preceded them. There are very few fossils in these shales and geologists have long understood that it was the scarcity of oxygen on a still and stagnant deep-sea floor that accounts for that. When we do find fossils, they are usually of very small animals. These had been plankton, animals floating in the oxygen rich surface waters. The notion of strong currents in black shale seas simply does not work. Nor does the concept of rapid deposition. 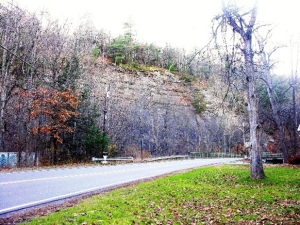 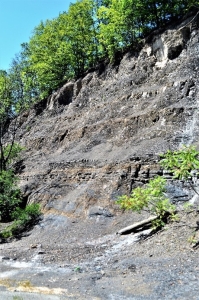 You can see good black shales on the Glasco Turnpike where it crosses Plattekill Creek near Mt. Marion (our 1st photo). Other black shale strata are seen along Rte. 209, north of Kingston (our 2nd photo). Visit either of these locations and see the dark color and view the thin laminations. Uniformitarianist geologists find sediments resembling these at the bottoms of today’s very deep seas. 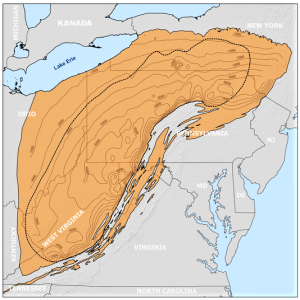 Collectively, many of our black shales belong to the infamous Marcellus Group. Perhaps you have seen maps of the Marcellus. Then you know that it is spread out across most of eastern North America. See our third illustration. It took a large sea to accumulate all that shale and a deep one too. And that gets us to our main point. Black shales were produced from muds that were deposited slowly at the far offshore bottoms of deep and very still seas. Their muds were made of grains of silt and clay that had drifted there and slowly settled to the bottom, one lamination at a time. It took very long lengths of time to deposit what we see at Mt. Marian or along Rte. 209, far more than fits in with the young Earth timeframe.

Black shales are important; they make up very thick, common and widespread rock units all around the world. None of them fits in, even remotely, with the story of a violent and brief Noah’s deluge.