Last time we took an elevator into the earth and had a look at the geological history that’s buried in the strata of Overlook Mountain. It’s a great trip of the human imagination, a voyage of the mind’s eye. But it leaves a person wanting to see the real thing. In that column we left you stranded, about 8,000 feet below the peak of Overlook, on the shores of an ancient sea. This week let’s get on an escalator and ride back to the surface. Get your car, this trip won’t be imaginary.

Let’s start just west of Saugerties, at the intersection of Rte. 212 and Rte. 32. Drive north on Rte. 32. You won’t go far before you start noticing light gray rocks, mostly on the right side of the road; this is the Onondaga Limestone. It’s a good solid rock which makes up many fine outcrops. It’s not much to look at, but to a geologist it conjures up a most attractive image. The sediments that once made up the Onondaga were deposited on the floor of a shallow, tropical sea. If you wanted to see something like this today, you would have to travel to Florida or the Bahamas. First picture beautiful aqua-colored seas, soft pink beaches and a mild tropical climate, and then look about you in the Hudson Valley of today. Things change – in 400 million years.

Exactly two miles north from where we started, the road veers to the left and cuts through a major exposure of the Onondaga. Sizable cliffs can be seen on each side of the road. Stop here and take a good look. On the right side of the road, below the billboard at the far end of the outcrop, we found some fossil shellfish. We had to look carefully, but they were there. These were the invertebrates that lived in the Onondaga Sea.

Continue another half mile up Rt. 32 until you reach a fine outcrop just beyond the feed store. This is different, it’s a thick sequence of brown sandstones called the Mt. Marion Formation. Our escalator has taken us upwards through time; we are no longer on the floor of a pretty, shallow, tropical sea. We are now at the bottom of a deep ocean. The thick beds of sandstone record moments of rapid deposition of sand on the bottom of this sea. The sequence is so thick that one wonders where all of that sand could have come from. Also, the beds are steeply inclined. Why is that? Beds of sand should be deposited in horizontal sheets, not inclined ones.

The answer to both these questions is that these Hudson Valley strata record the history of a great geological event. Off to the east, in today’s New England, a mountain building event once occurred. There an ancient version of the Appalachians, called the Acadians, rose to great elevations. All mountains crumble and as these began to be eroded, enormous amounts of sand poured into New York State. Also, mountain building deformation produced the inclined strata that we see on Rte. 32. It’s brought these rocks to the surface, they’re the same strata we saw thousands of feet beneath Overlook! 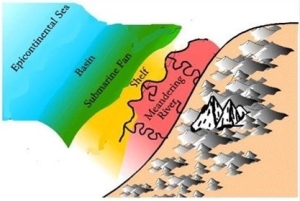 Continue west on Rte. 32. As you reach Palenville the steep Catskill Front begins to loom above. Gaze upwards and you will be able to start really appreciating the full meaning of geologic time. Up there, all the rocks are clearly stratified. They are mostly sandstones, all from sands eroded off those old mountains. You are looking at the deposits of the great Catskill Delta, a complex of sediments accumulated at the base of the old Acadian Mountains. Once this was a mass of soft, wet sands, similar in size and scope to southern Louisiana where the Mississippi empties into the Gulf of Mexico. 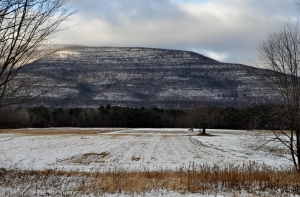 Stop in Palenville, take your time, and really gaze at this sequence. Each horizon, up there, took its turn being the surface of the earth. Each was either the floor of a shallow sea or the surface of a delta landscape. Each of these landscapes and seascapes, in its time, seemed as permanent as any you see today. But both the Catskill Delta and the Acadian Mountains that produced it have been gone for hundreds of millions of years. They came to be buried in the relentless course of geological time. Continue your drive up into Kaaterskill Clove and pass hundreds of more feet of strata – and history; it really is an escalator ride through time.